Sona Mohapatra in a long post thanked former Bollywood actress Tanushree Dutta for her support over her #MeToo battle towards music composer and Indian Idol judge Anu Malik. The latter was first accused of misconduct last year during the #MeToo wave and was temporarily dropped as the judge of the reality show. However, after he was reinstated in September, the allegations resurfaced again. Many women such as Shweta Pandit, Neha Bhasin, and others have leveled allegations against him. However, thanking the former actress for her support and claiming that she is completely 'elated', Mohapatra wrote, "The tide is turning and while it does take time, the good people of the world do rally together to fight evil and help change things for the larger good. So many speaking up and showing solidarity in public has strengthened the movement. MeToo will not die that easily, the second wave is here and its TimesUp now,". Read her entire post below-

Meanwhile, actor Abhay Deol was one of the first celebrities to support Sona in her tussle with SonyTV through his comment on Sona's note. His effort was reciprocated by the singer with praise for being 'the first actor from the industry' to back her in her efforts. Sona Mohapatra took to Twitter to share a screenshot of the actor's message along with her acknowledgment of the same. 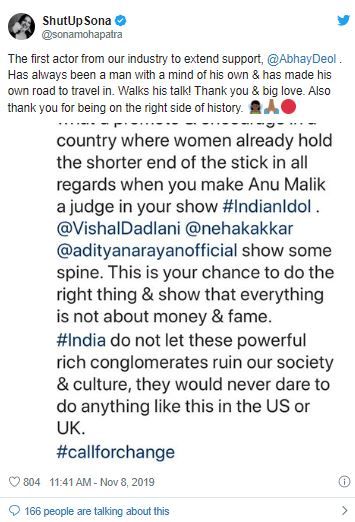 Sona Mohapatra is one of Bollywood's most underrated singers. She hails from the state of Odisha and was born in the city of Cuttack. Sona Mohapatra has performed in concerts across the world and has also featured in albums, singles,  concert webcasts, music videos, and advertisements, besides Bollywood movies. Sona Mohapatra is married to music composer Ram Sampath, who is best known for composing the soundtrack of the 2011 comic-caper, Delhi Belly, produced by Aamir Khan.

READ: Abhay Deol Stands By Sona Mohapatra Amidst Her Fight With Anu Malik