Sunny Deol has now reunited with Gadar's helmer Anil Sharma, and shared a pair of joyful pictures from his meet on his official Instagram handle. 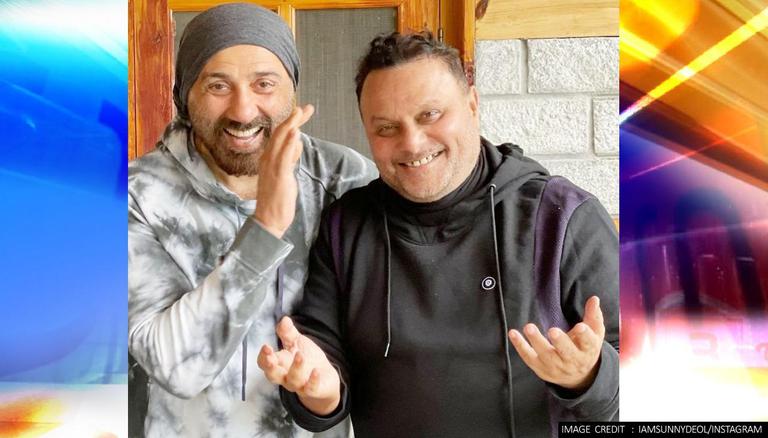 
It's been almost a decade that Gadar: Ek Prem Katha has released. The romantic period action film featured Sunny Deol in the lead role and the actor went on to become an overnight sensation. Deol has now reunited with Gadar's helmer Anil Sharma and shared a pair of joyful pictures from his meet on his official Instagram handle. Take a look.

Sunny Deol took to the photosharing site and updated his fans and followers that he has reunited with Anil Sharma after years. He shared a pair of happy pictures as he enjoys his stay at Baragarh Resort and Spa in Manali with the director. Deol can be seen sporting a white and grey coloured hoodie with a black bandana, while Sharma donned a black hoodie. The second picture also featured Shaktimaan. As for the caption, Dharmendra's son wrote, "खूब जमा रंग जब मिले हम तीन यार। (It will be fun when we three friends meet). Such reunion and creative sessions always cheer me up for the challenges ahead! @anilsharma_dir '#shaktimaan' '#creativeminds' '#reunion.'"

Anil Sharma also shared the pictures on his Instagram handle and penned a sweet note. He captioned the post as, "Always Enjoy every moment together with iamsunnydeol n '#shaktimaan'... lovely staying at @baragarh_resort_spa Manali ..thx @khullarnakul."

2001's release Gadar: Ek Prem Katha is set during the Partition of India that took place in 1947. It is loosely based on the life journey of Boota Singh and also starred Amisha Patel, Amrish Puri, and Lillete Dubey in pivotal roles. The film was a commercial success and is considered to be the second most-watched Hindi film since the 1990s. Sunny Deol's shy role was highly praised by the audience. He also bagged a Best Actor nomination at the 47th Filmfare Awards.

The film will be renewed with Anil gearing up for Gadar 2: Ek Prem Katha. The sequel will be retaining its original actors along with Genius fame Utkarsha Sharma, who played the lead couple's son. Reportedly, Sharma has been working on the film, however, a formal announcement is yet to be made.

Anil Sharma, Dharmendra, and Sunny Deol are also working on Apne's sequel. The film features all three generations of the Deol family including Bobby Deol, and Dharmendra's grandson, Karan Deol.