'Super 30' | Sussanne Khan Makes A Big Claim About Hrithik Roshan's Latest Film Ahead Of Its Release, Here's Her View

As Hrithik Roshan's upcoming film 'Super 30' is all set to hit the theaters, ex-wife Sussanne Khan came forward to cheer for the actor. She described the upcoming venture as Hrithik's best ever.

Hrithik Roshan and Sussanne Khan were one of the hottest couples in Bollywood before they ended their marriage years back. However, unlike other exes, the celebrity pair continued to remain friends and co-parent their children, Hrehaan and Hridhaan. Now, as Hrithik's upcoming film 'Super 30' is all set to hit the theaters, Sussanne Khan came forward to cheer for her ex-husband.

On Tuesday, July 9, Hrithik shared a post on Instagram marking 'Super 30' copy out, Sussane Khan commented on the post saying the film is the actor's best ever and she is very much proud of him.

Here's what Sussane Khan said about the upcoming venture: 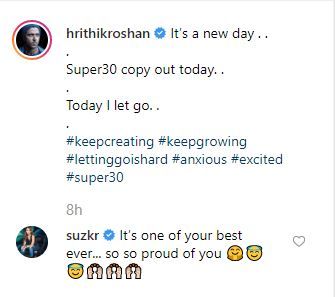 Hrithik and Sussanne continued to be each other's support system even after their split. In every high and low they have been seen standing by each other. In fact, they are often spotted vacationing together with their children. While many speculate their patch-up, there is no confirmation on the same from their side.

As per media reports, during her appearance in Neha Dhupia's chat show 'BFFs with Vogue' alongside her close friends Sonali Bendre and Gayatri Oberoi, she opened up about her equation with ex-husband. Reminiscing the first time she first met Hrithik, she said that when she came back completing her Interior Designing course in LA, she met him. Although the 'Krrish' actor was not a superstar back then, for her he was.

READ: Hrithik Roshan Remembers His Two 'Super Teachers' Ahead Of The Release Of 'Super 30', Here's Who They Are

Meanwhile, 'Super 30' directed by Vikas Bahl chronicles the life story of India's mathematician Anand Kumar. The mathematical genius based in Bihar opens an institute to teach the underprivileged children. Under the 'Super 30' initiative, Anand trained Indian Institute of Technology (IIT) aspirants crack the entrance exam to the prestigious institute.

The upcoming biopic will be produced by Reliance Entertainment and Phantom Films. Besides Hrithik, the film also stars Mrunal Thakur, Amit Sadh, and Nandish Sandhu in pivotal roles. It is scheduled to hit the theaters on July 12, this year.