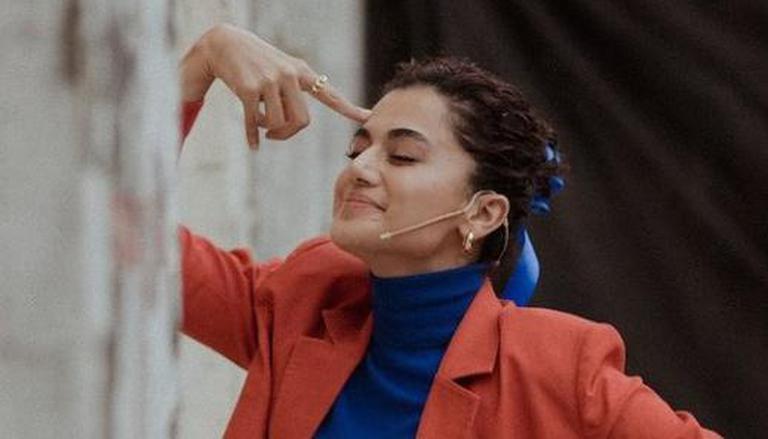 
Badla star Taapsee Pannu is currently gearing up for her upcoming investigative comedy-drama titled Woh Ladki Hai Kahaan? The actor took to her official Instagram handle and dropped a selfie picture of herself where she is seated in a car. She can be seen flashing her faded smile as she posed for a selfie picture. The actor also talked about 'new beginnings' as she commences the shoot of Woh Ladki Hai Kahaan.

Taking to the photo-sharing site, Taapsee Pannu posted a selfie picture on her IG story. She can be seen donning a light pink coloured hoodie while travelling. As for the caption, the actor wrote, "Happiness is moving towards new beginnings... #WohLadkiHaiKahaan #WHLK."

Woh Ladki Hai Kahaan is backed by Roy Kapur Films and features Taapsee and Scam 1992: The Harshad Mehta Story star Pratik Gandhi in the lead roles. The investigative comedy-drama will feature Pannu as a feisty cop, while Pratik will play a chauvinistic brat who 'finds himself compelled to take a riotous, madcap ride with Taapsee's character, whose attitude to life is the diametrical opposite of his.' The film was first announced by producer Siddharth Roy Kapur in the month of February this year. He took to his verified Twitter handle and posted a collage picture featuring himself, and the actors.

He wrote, "Happy to announce our next production, a madcap comedy filled with twists and turns in the search for a missing ladki! #WohLadkiHaiKahaan? starring @taapsee and @pratikg80, produced by #SiddharthRoyKapur and written & directed by @justarshad. On the floors soon!"

Happy to announce our next production, a madcap comedy filled with twists and turns in the search for a missing ladki!#WohLadkiHaiKahaan? starring @taapsee and @pratikg80, produced by #SiddharthRoyKapur and written & directed by @justarshad. On the floors soon! pic.twitter.com/SrO26XxmeM

The film is penned and helmed by Breathe: Into The Shadows co-writer Arshad Syed. In a statement, Roy Kapur revealed that he decided to produce the film immediately after Syed narrated his 'charming and delightful' screenplay.

Furthermore, Taapsee Pannu was recently seen in a titular role in a sports drama titled Rashmi Rocket. The actor has a busy schedule ahead with numerous films in her kitty. The actor is also committed to multiple projects including the likes of Looop Lapeta, Jana Gana Mana, Dobaaraa, Alien, Shabaash Mithu, Mishan Impossible, and Blurr. On the other hand, Pratik Gandhi was last seen in a Gujarati film titled Bhavai. He will next be seen in Atithi Bhooto Bhava, Dedh Bigha Zameen, and an untitled project.