Taking to Instagram, Tamannaah Bhatia dropped a candid glimpse of herself from France as she gears up for the Cannes Film Festival 2022. Read further for more. 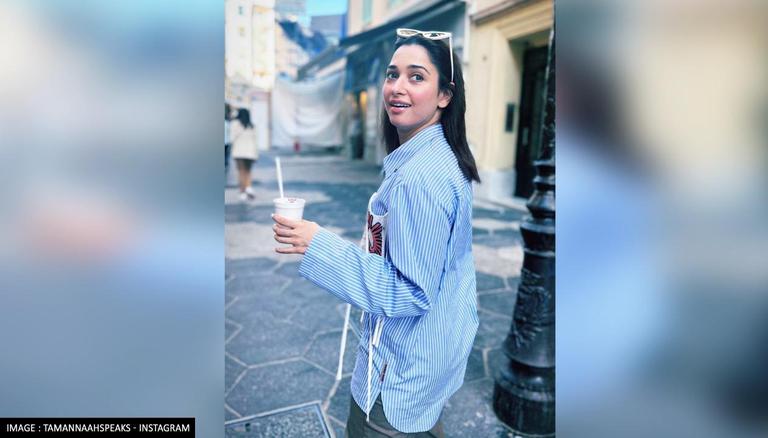 
The highly awaited 75th Annual Cannes Film Festival is all set to commence today, with famous Indian personalities all set to grace the red carpet. While Deepika Padukone earlier gave fans a glimpse of her arrival in France, actor Tamannaah Bhatia also dropped an adorable picture of herself as she gears up for the festival.

The F3: Fun and Frustration star was spotted at the Mumbai airport on May 16, as she headed to France, clad in an oversized brown pantsuit with floral embellishments. Apart from Tamannaah and Deepika, the Indian contingent also includes Nayanthara, Pooja Hegde,  Aishwarya Rai Bachchan, R Madhavan, AR Rahman, and Nawazuddin Siddiqui among others.

Taking to her Ingram stories recently, Tamannah dropped a candid still of her with a beverage in her hand. Her simple yet stylish look comprised of a striped shirt and cargo pants. In the caption, she mentioned, "En route Cannes." Take a look.

Meanwhile, Deepika Padukone will be representing India at the 75th edition of the festival as a part of the jury, which also includes Noomi Rapace from Sweden, Jeff Nichols from the United States of America, Jasmine Trinca from Italy, Joachim Trier from Norway among others. The Jury President for Cannes Film Festival 2022 is Vincent Lindon.

Tamannaah will be seen alongside Venkatesh and Varun Tej in Anil Ravipudi’s romantic comedy film F3. Coming as a sequel to the 2019 flick F2: Fun and Frustration, it will release theatrically on May 27, 2022.

She recently wrapped up shooting for Madhur Bhandarkar's forthcoming project Babli Bouncer. Also starring Saurabh Shukla, Abhishek Bajaj, and Sahil Vaid in pivotal roles, the film has been bankrolled by Fox Star Studios and Junglee Pictures. It will release in Hindi, Tamil and Telugu languages.

READ | Tamannaah Bhatia wraps up 'Babli Bouncer' shoot; calls it 'an experience of a lifetime'