Priyanka Chopra's 'The Sky Is Pink' premiered at the Toronto International Film Festival 2019 & viewers have already started reviewing the film on social media.

Priyanka Chopra and Farhan Akhtar's much-awaited venture 'The Sky Is Pink' finally premiered at the Toronto International Film Festival 2019 on Saturday and viewers have already started reviewing the film on social media. From what appears from the initial reviews, The Sky Is Pink has won the hearts of the audience. The film which reportedly got a standing ovation of over 15 minutes, has been described as a 'tearjerker', 'packed with emotions' by the viewers on social media. In fact, many people have also called 'The Sky Is Pink' a 'landmark film' in Hindi cinema.

Here are some of the posts:

A snippet of the standing ovation #TheSkyIsPink got at the end of the world premiere at #TIFF19 last night. It’s a tearjerker, lots of sniffing at the end. It’s that kind of movie. @priyankachopra @FarOutAkhtar #ShonaliBose pic.twitter.com/whUlOPG9QG

#TheSkyIsPink will be a landmark film in Hindi cinema and fully deserves the standing ovation it gets at the end of the screening. Can’t wait for India to experience this brilliance. And thank you Sid Roy Kapur and Ronnie Screwvala for backing it. #TIFF19

The Sky is Pink

Directed by Shonali Bose, 'The Sky Is Pink' is a love story of motivational speaker Aisha Chaudhary's parents, played by Priyanka and Farhan. 'Dangal' actress Zaira Wasim, who recently quit acting, is essaying the role of Aisha in the film. Rohit Saraf is also a part of the cast. Aisha was diagnosed with pulmonary fibrosis. The news was shared on the official website of the movie gala, which is scheduled to run through September 5 to 15. 'The Sky Is Pink' is scheduled to hit the theaters this October.

Nick Jonas congratulates Priyanka Chopra for 'The Sky Is Pink' 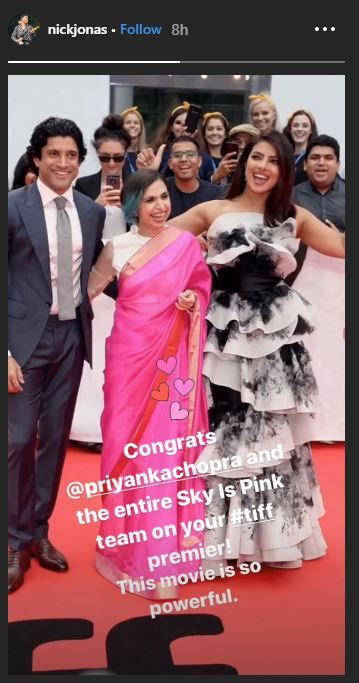 Here are the posts: 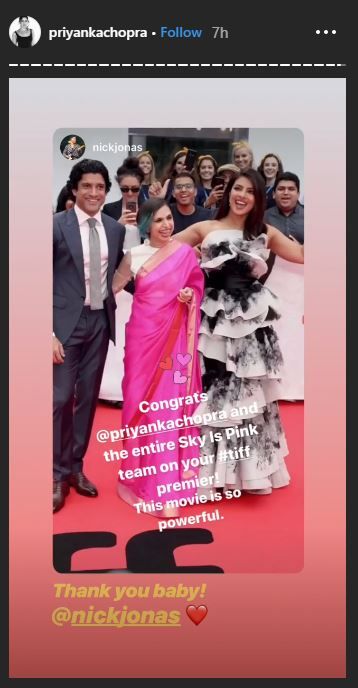