Tiger Shroff is "100% single" as confirmed by his sister Krishna Shroff. She went on to add that she would like to set up Disha Patani with Aditya Roy Kapur.

Tiger Shroff and Disha Patani make headlines quite often. The duo has been spotted together quite often, going out and about in the city and spending quality time together. Rumour mills about Tiger and Disha's rumoured relationship has been doing rounds on the internet for quite a while now, but there has been no confirmation of the same.

However now, a recent media report has quoted Tiger Shroff's sister, Krishna confirming that he is '100% single' and that she wants to set-up Disha Patani with Aditya Roy Kapur.

Recently, in an Instagram Q and A, Tiger Shroff was asked by a social media user if he is dating Disha Patani, to which he blatantly replied saying, "Mere itni aukat nahi hai" 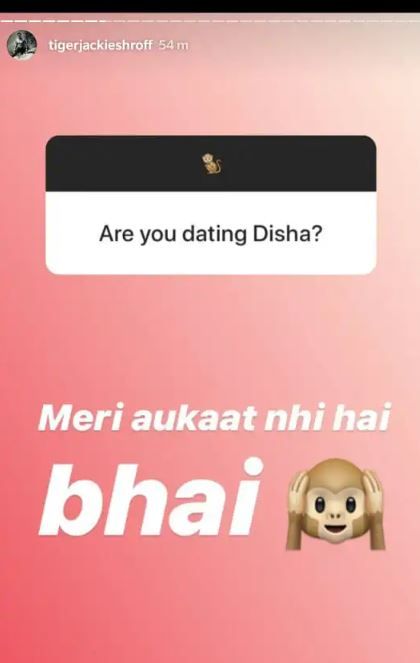 However, in an interview Disha Patani was asked about her alleged relationship with Tiger Shroff, to which she said, “I’ve been trying for so long, it’s been so many years and I’ve been trying to impress him. Now I’ve done this film Bharat where I’m doing all these stunts and I thought maybe he’ll get impressed but no luck. Yeah, we go to eat but that doesn’t mean he’s impressed, not like that like the crush impressed, but he likes everybody’s pictures like that. You must speak to him the next time. He’s shy and I’m shy so nobody’s breaking the ice.”

Disha Patani who was last seen in the film, 'Bharat', will next be seen in 'Malang' alongside Aditya Roy Kapur and Anil Kapoor. Tiger Shroff, on the other hand, is waiting with bated breath for his film, 'War' with Hrithik Roshan to release. From the looks of the trailer, one can say that it will be an action-packed performance, that promises to rake high numbers at the box office.

Tiger's film prior to that was 'Student of The Year 2' starring then Bollywood debutants Ananya Panday and Tara Sutaria. The film, however, gained mixed reactions from audiences and critics, thus faring averagely at the box office.