Twinkle Khanna Shares A Lovely Pic; Says 'My World Is Filled With All Sorts Of Creatures'

Twinkle Khanna recently revealed that she has spotted a snake and had visitors including rats, birds, butterflies and much more. Know more

Twinkle Khanna recently revealed that she has spotted a snake and had visitors including rats, birds, butterflies and much more. Twinkle Khanna took to her Instagram handle on Wednesday to share a picture of her garden which is completely a sight for the sore eyes. The actor-turned-writer has been keeping indoors with her family and has been giving glimpses about her lockdown days at home.

Taking to her Instagram handle, Twinkle shared a picture of her garden where one can the notice the greenery all around. One can also notice a silhouette of two birds on a bark of a tree which looks completely lovely. Along with the picture, Twinkle also went on to reveal her experiences during the lockdown. She revealed how she’s coming across the beauty of nature and how she’s loving all of it.

She wrote, “This morning on the oddly growing Champa tree, there is another pair of birds. My world these days is filled with all sorts of creatures.” She also revealed that a rat brushed its furry body over her bare leg and also had a snake making its way through the garden. She further added, “All these creatures were always around, I was the one who was too busy to see them.” Take a look the post below.

Seeing this post, several fans and netizens went on to comment on all things nice. Some netizens were stunned knowing about the things happening to Twinkle. While the others were all hearts over her this post. The post also received several likes and comments. One of them wrote, “Into the wild ;) or always in there ;)” While the other one wrote, “This is beauty”. Take a look at a few comments below. 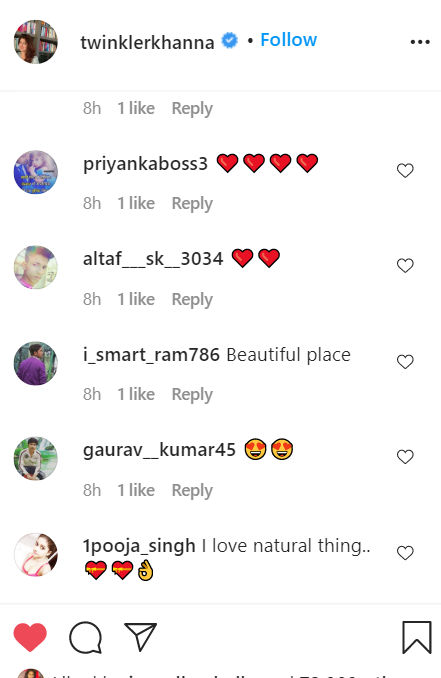 Apart from this picture, Twinkle has been giving several glimpses on how she spends her day at home with her loved ones. She has been sharing pictures, videos, throwback, memories and lots more. The actor recently shared glimpses of her knitting. She can be seen doing an embroidery design. She also went on to recall a fond memory of how when she was small she would learn all of this at her grandmother’s place. Take a look at the post below.

Also read | 'Get Your Own': Twinkle Khanna Calls Out Akshay Kumar For 'robbing' Her 'floral' Mask