Varun Dhawan has a hilarious take on Remo D'Souza marrying wife Lizelle on their 20th anniversary. Take a look at the adorable post featuring Shraddha Kapoor -

Ace choreographer-turned-director Remo D'Souza celebrated his 20th marriage anniversary with wife Lizelle by marrying her for the third time. The two performed the Christian rituals at a church on October 5. Wishing the two and gracing the special ocassion was actor Varun Dhawan who took to his Instagram handle to make a hilarious comment saying people hesitate to marry once but Remo did it three times. Check out the photo that also features Shraddha Kapoor. The lead actors will be seen in Remo's upcoming film 'Street Dancer 3D'.

Remo and Lizelle's Church wedding on Saturday was simple yet stunning. The two exchanged rings, danced together and posed for happy pictures. Wishing Remo a 'happy 20th' anniversary, Lizelle shared some adorable pictures with husband and wrote: "we fight like bas next minute we will never look at each other and in half and hour u go all normal I love you my cranky .. funky , handsome , hardworking , most simple and most moody the side only which I have seen luv u my pillar, my best friend , my luv .... let’s rock it today", meanwhile, Remo too wished his lady and soulmate on their special day with stunning pictures.

ABCD Movie: A look back at Remo D’Souza's dance franchise 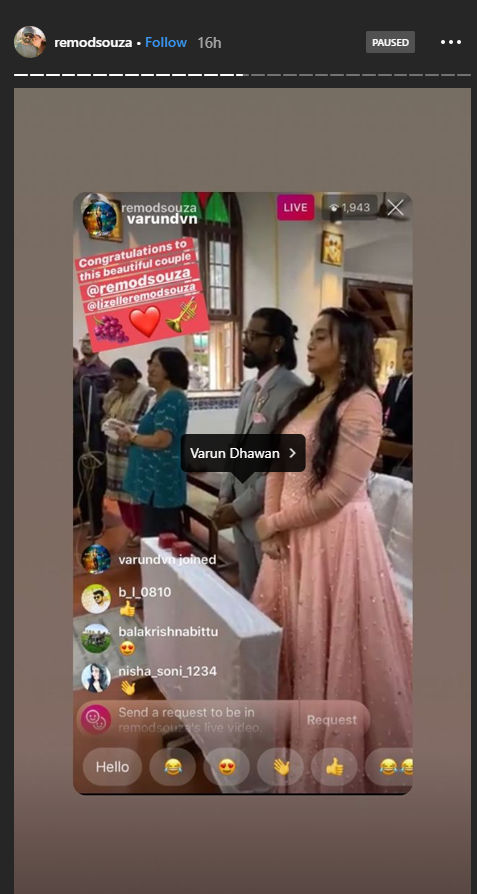 After Remo D’Souza’s last dance film ABCD became a box-office success, the director is coming with his another dance venture titled Street Dancer 3D. The movie features Varun Dhawan and Shraddha Kapoor in the pivotal roles. When the film’s shooting got wrapped up, Varun Dhawan took to his social media handles and said that he cannot express his emotions in words. Street Dancer 3D also features Prabhdeva and Nora Fatehi.

Its a WRAP on #StreetDancer3D. I cant explain my emotions all I can say is I love the people involved with this film and that we are all connected. Thank you to all the teams and dancers from all over the world who have come together to make this film happen #jan24 #family pic.twitter.com/FfTDsRHVD8