Vidyut Jammwal Announces 'Sanak' Release Date; Here's Where And When To Watch The New Film

Vidyut Jammwal-starrer 'Sanak- Hope Under Siege', which skipped theatrical release, is all set to stream from October. Read to know release date and more 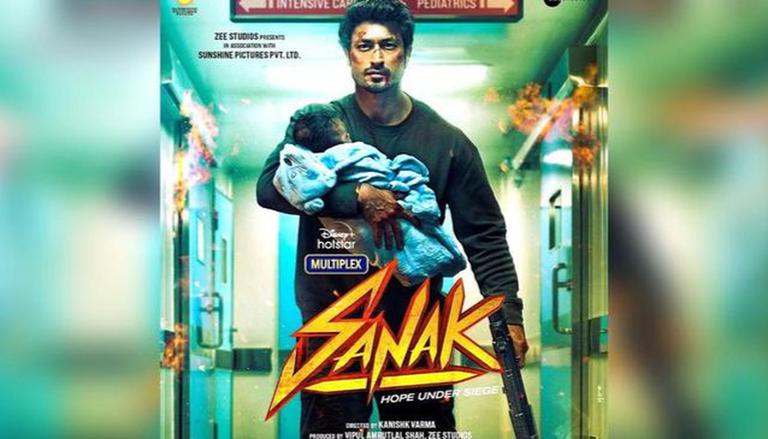 
Vidyut Jammwal starrer Sanak- Hope Under Siege, which skipped theatrical release, is all set to stream on the digital platform Disney+ Hotstar from October 15.

The actor took to his Instagram handle and shared a new poster of the film while announcing the digital release date of his upcoming movie Sanak. "Ek baar SANAK gayi na toh…Complete the sentence in #SANAKI style #SANAK releasing on 15th October only on @disneyplushotstar #DisneyPlusHotstarMultiplex, (sic)" he captioned the post.

READ | 'The way I knew him': Vidyut Jammwal to pay tribute to Sidharth Shukla; Know how

The new poster of the film features the lead actor Vidyut Jammwal holding a baby in one hand and a gun in the other.

Neha Dhupia, on the other hand also shared the same poster on her Instagram handle and wrote, "Mark your calendars 👉 because we have a date ❤️#Sanak streaming from 15th October only on @disneyplushotstar #DisneyPlusHotstarMultiplex#"

Earlier, the actor had announced that his movie will be released digitally, however, the date was not released till then, With a new poster where he can be seen engaged in intense combat, with ammunition in his hand, the actor tweeted, "Maine sunna hai, SANAK kuch bhi karwa sakti hai aur pyaar main Sanki bana sakti hai... Ab meri #Sanak karegi saari hadein paar! My upcoming action thriller coming soon on @DisneyPlusHS. #DisneyPlusHotstarMultiplex. ( I've heard SANAK can make you do anything, even drive you crazy in love). (sic)"

Meanwhile, Vidyut Jammwal has commenced shooting for his upcoming Khuda Haafiz Chapter II Agni Pariksha with Shivaleeka Oberoi in July. The film is a sequel to the last year's Khuda Haafiz, which revolves around Vidyut's character Sameer Choudhary who embarks on a mission to save his wife Nargis (Shivaleeka Oberoi), who gets caught up in flesh trade upon her arrival in the Middle East. Besides this, the actor has also announced his home production, IB71, which is being directed by Sankalp Reddy.