Hrithik Roshan and Tiger Shroff are playing enemies in ‘War’. In an interesting marketing move, the duo is taking digs at each other on their T-shirts.

In less than a fortnight we will know who is winning the ‘War’, Hrithik Roshan or Tiger Shroff. Till then, however, and as the trailer and songs depicted, the fight is neck-to-neck. And this doesn’t just include one-liners, good looks, enviable physique, stunts and grooves. The duo is also taking on each other in a T-Shirt war, which might seem hilarious, but is actually intense. Hrithik Roshan and Tiger Shroff have been taking digs at each other with each other’s photos on their attires and caption mocking them.

‘War’, directed by Siddharth Anand and also starring Vaani Kapoor, is gearing up for release on October 2. Hrithik Roshan and Tiger Shroff are completely immersed in the promotions of the film. But what’s interesting is that there is no camaraderie during the media interactions, as the duo have been taking jibes at each other though their style.

Hrithik Roshan recently wore a T-shirt with Tiger Shroff’s ‘A Flying Jatt’ poster and the caption read, “Flying away from this war already”. Tiger Shroff won’t give up without a fight either. He donned a T-shirt of Hrithik Roshan’s Krrish’s avatar and asked “Hiding your fear behind a mask?”

That wasn’t all, Hrithik Roshan also shared a picture of the two together on his T-shirt, and said, “No tiger can beat the master of the jungle.”

Tiger Shroff’s was more stinging, a photo of Hrithik Roshan’s ‘Ek Pal Ka Jeena’ song still and a reference to the lyrics of the song, “Khaali hath aaye the hum, khaali haath jaayenge (We came empty-handed and we will leave so)”. He said, “Khaali hath jaane ko taiyaar?” (Are you ready to return empty-handed).  Let’s see when and where this ends. 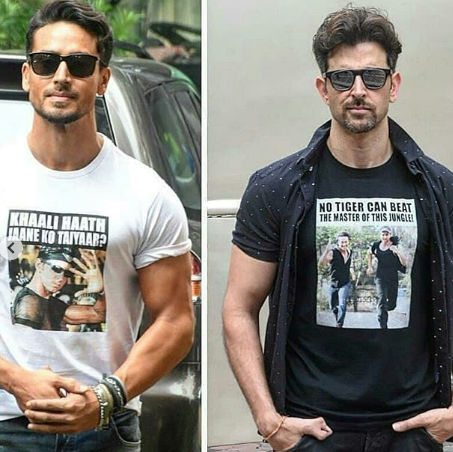 Not the first time

Incidentally, this is not the first time that celebrities have been wearing T-shirts of other celebrities. John Stamos wearing snaps of the Jonas Brothers on his T-shirt, and Nick Jonas then reciprocating the gesture by wearing a T-shirt with Stamos’ picture had gone viral. However, that was love, but in this case, it is intense hate between Hrithik Roshan and Tiger Shroff.

‘War’ at the box office:

While Hrithik Roshan and Tiger Shroff are taking on each other, they will have to be united when they face South biggie ‘Sye Raa Narasimha Reddy’ that also hits the theatres on October 2.