'Wedding Over In A Few Hours': Amitabh Bachchan Reveals The Story Behind Marriage In A Rented House With Jaya Bachchan. Read Here

The much-celebrated veteran Bollywood couple Amitabh Bachchan and Jaya Bachchan are celebrating their wedding anniversary on Monday, June 3. Ahead of the same, Amitabh Bachchan on Sunday took to his blog 'Bachchan Bol' and recalled the beginning of their 46 years of togetherness.

The much-celebrated veteran Bollywood couple Amitabh Bachchan and Jaya Bachchan are celebrating their wedding anniversary on Monday, June 3. Ahead of the same, Amitabh Bachchan on Sunday took to his blog 'Bachchan Bol' and recalled the beginning of their 46 years of togetherness. The veteran actor revealed that their wedding that took place in a day's plan surrounded by the families of the two.

Big B who was dating his 'Sholay' co-star Jaya Bhaduri back then said that they tied the knot in a haste. Although they were sure to spend life with each other, they were not thinking of getting married just then, the actor revealed.

Getting candid about his wedding in the recent blog post, Sr Bachchan said that it was his parents-Harivansh Rai Bachchan and mother Teji Bachchan who insisted them to tie the knot. He said that his parents wanted them to get married before leaving for a vacation in England, that they planned to celebrate his film 'Zanjeer's success.

READ: Abhishek Bachchan Has The Perfect Message For His Parents On Their Anniversary As The Evergreen Couple Turns 46

In the post, he wrote, " I lived on the 7th Road of this society .. on a rented house .. marriage had been decided among us .. nothing to be exaggerated or celebrated with any aplomb .. just the two families and .. done .. off to London, my first trip ever and hers too .. Zanjeer a success and a promise that if it did well we would all - a gang of our friends - would go on a holiday to London !"

"Seeking or rather informing parents that we were a group of friends going to England .. who all are going come to the query from Babuji .. names disclosed .. Jaya is also going with you .. you both are alone .. yes .. if you have to go marry and go .. ok .. pandit and family informed .. next day all set .. flight at night .. marriage to finish before the flight .. " he added.

Further giving out details of the much-buzzed wedding, he wrote, "I dress up in formal marriage Indian .. get into my car and want to drive to Malabar Hill where her friends lived and where the ceremony was to be done .. my driver Nagesh, pushes me out and insist he would drive me to the wedding .. the substitute for the tradition horse .. " 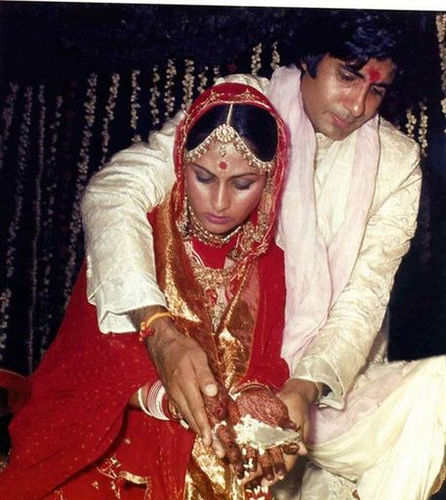 "Waiting all set at Mangal, the name of the house on rent on the 7th road JVPD Scheme .. and it begins to drizzle .. neighbors rush out to me .. leave for the wedding now .. the rain is a good omen .. off I went .. wedding over in a few hours .. done .. Mr and Mrs proclaimed .. over !!" he concluded.

The Bachchan family is known to share strong family bonds. Amitabh Bachchan who is known to be very close to his children Abhishek Bachchan and Shweta Bachchan Nanda is often seen spending some quality family time together. In fact, both Big B and Abhishek often shares throwback pictures expressing admiration for each other.

Meanwhile, on the professional front, Bachchan Sr is riding high on the success of ‘Badla’ and has numerous movies like ‘Brahmastra’, ‘Sye Raa Narasimha Reddy’, ‘Jhund’  and ‘Tera Yaar Hoon Main’ releasing in the next year.