After Sooryavanshi, another action film that was making rounds on the Internet over box office collection for a long was John Abraham starrer Satyameva Jayate 2 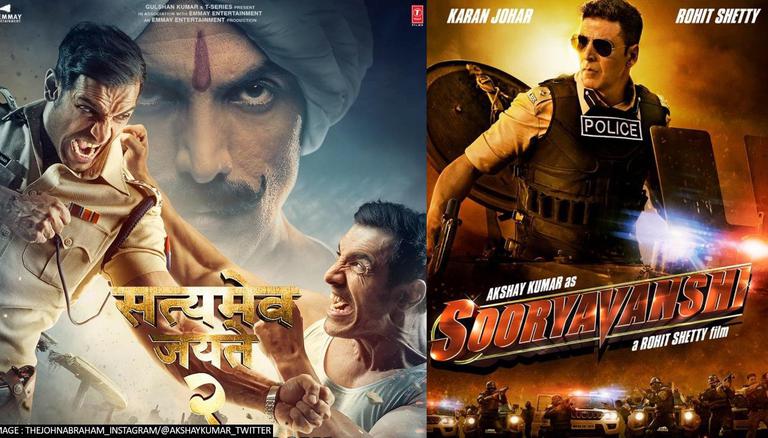 
After Sooryavanshi, another action film that was making rounds on the Internet for a long was John Abraham starrer Satyameva Jayate 2. The film that started running theatrically from November 26, did not open grand at the box office. The film, which opened much lower than the first instalment of the franchise, dropped further after opening day. According to Box Office India, the film earned Rs 3 crores on an opening day. However, Akshay Kumar starrer Sooryavanshi had broken all the records.

The Rohit Shetty directorial film Sooryavanshi that had faced multiple postponements due to the ongoing coronavirus pandemic, has become a commercial success. The film that had released on November 5, on Diwali had managed to mint Rs 26 crores on an opening day. The film that raved good reviews, had managed to bring the audience back into the theatres ever since it was shut down after the second wave of the pandemic.

Apart from witnessing a great run on the first day, Sooryavanshi had witnessed a slight drop in the collection as according to Box Office India, the film had raked in Rs 24.50 crores on the second date. According to film critic and trade analyst Taran Adarsh, the film roared at the box office, despite theatres in Maharashtra, the biggest market, having a 50 per cent occupancy due to COVID-19 restrictions. On the other hand, Satyameva Jayate 2 showed John Abraham in triple roles, had earned Rs 1.75 to 2 crores on the second day, according to a report by Box Office India.

It is now being said that Sooryavanshi which is into its fourth week at the box office, could gain from Satyameva Jayate 2's poor figures. The Rohit Shetty directorial starring Akshay Kumar is inching towards the Rs 200 crore mark, with Rs 185 crore already in the kitty. The film is the only film in the COVID pandemic era to hit the Rs 100-crore club at the box office.

Satyameva Jayate 2 has been directed by Milap Zaveri, who had also helmed the original. John Abraham plays a triple role in the venture. The main plot revolves around twin brothers, one a police officer and another a violent vigilante, while the memory of their father, who had stood up against injustice in the past, forms an important part of the plot.

READ | We were cheering for 'Sooryavanshi' so we all can release our films, says Shahid Kapoor

READ | 'Sooryavanshi' & others: How stunts on vehicles have evolved in Bollywood in a decade