Bollywood actress Anushka Sharma came forward to back industry-mate Zareen Khan after she was body-shamed for sharing a picture that showed her stretch marks.

Bollywood actress Anushka Sharma recently came forward to back her friend and industry-mate Zareen Khan after she was body-shamed for sharing a picture that showed stretch marks on her stomach. Anushka Sharma took to social media and extended an empowering message for Zareen Khan. While backing the 'Veer' actress, Anuska Sharma said that she is beautiful and perfect the way she is.

"Zareen, you are beautiful and brave and strong and perfect just the way you are. #appreciationpost #lookbeyondbody," Anushka Sharma wrote on her Instagram story. 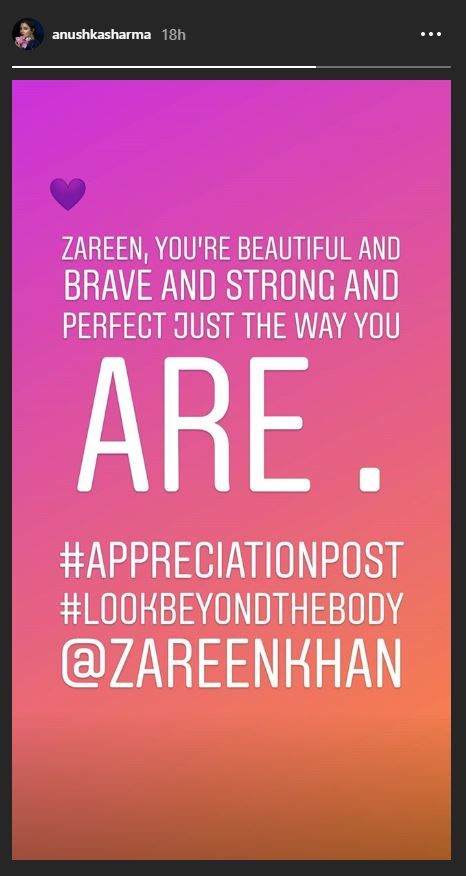 Zareen Khan recently shared a picture of herself on social media where she can be seen standing against a lake in Udaipur.  The Bollywood diva looked absolutely beautiful clad in a white crop top and black culottes. While thousands of people praised Zareen Khan's beauty in the picture, a set of people trolled her massively for posting a picture that displayed stretch marks.

However, Zareen did't not succumb to the criticism, rather gave it back to the trolls in a consecutive post. She shared another picture of herself on Instagram and captioned it with the lyrics from Paul Weller's motivational song 'Wild Wood'.

"Don't let them get you down, making you feel guilty about. Golden rain will bring you riches. All the good things you deserve and now", Zareen Khan wrote alongside the picture.

Meanwhile, on the professional front, Zareen Khan last appeared in Vikram Bhatt's 2018 horror film 1921 which also starred Karan Kundra in the lead. The film was a spin-off from the 1920 film series and was declared an average grosser at the box office. Zareen Khan will be next starring in Punjabi film 'Daaka' which is set to release later this year.

READ | Kalki Koechlin Makes It Insta-Official With Her 'Favorite Caveman'