Angelina Jolie took some time off from her hectic schedule and spent time bonding with daughter Shiloh Jolie-Pitt in Rome. They attended Maneskin concert. 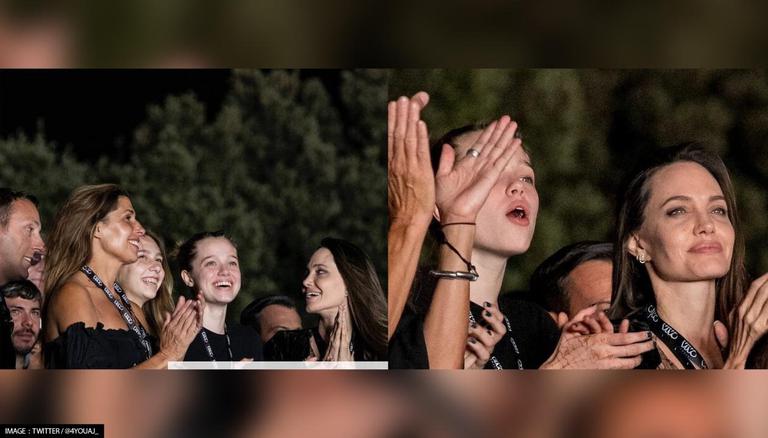 
Actor Angelina Jolie took some time off from her hectic schedule and recently spent time bonding with her daughter Shiloh Jolie-Pitt in Rome. The 47-year-old Academy Award winner and her daughter rocked out during Italian glam rock band Måneskin's performance in Rome recently. With several viral pictures from the concert making rounds on social media, the mother-daughter bonding has garnered the interest of the fans.

In the pictures from the show at Circo Massimo, the two could be seen smiling and mommy Jolie appeared to be enamored after seeing her daughter enjoying every bit of the rocking concert. The photos also showed adorable mother-daughter pair twinning in black and having a blast as they kept laughing, smiling, and singing along to the band’s songs.

The Maleficient: Mistress of the Evil star's daughter, Shiloh previously showed off her own rhythmic talent while performing a dance to Vegas by Doja Cat in a viral video last month. She led one of several dance trios featured in the video by choreographer Hamilton Evans at Millennium Dance Complex in Los Angeles. Shiloh had uploaded the video on her YouTube channel. The teenager has been associated with the Millennium Dance Complex in Los Angeles for some time now. She’s also featured in a number of videos from the studio that has collaborated with Britney Spears, Justin Timberlake, Janet Jackson, and Jennifer Lopez.

According to reports by Wanted in Rome.com, earlier, last week, the Eurovision-winning Måneskin faced down calls from Rome doctors to postpone their sold-out show, due to fears of it acting as a mega-cluster for new COVID-19 infections. The city's councillor for major events Alessandro Onorato later criticised the calls and confirmed that the much-anticipated concert would go ahead as planned on Saturday.

Angelina Jolie with her daughter Shiloh at Maneskin concert in Italy❤
July 9, 2022. pic.twitter.com/UxBtjmsR1H

This is not the first time that fans have spotted the mother-daughter duo together for an outing. A couple of months back, Shiloh accompanied her mother to the London premiere of Eternals. Then in Rome for another leg of the promotional tour, Shiloh sported a black velvet gown and a bright yellow pair of sneakers where she escorted her mother.  Angelina Jolie co-parents Shiloh Nouvel with ex-husband Brad Pitt. They also share Maddox Chivan, 20, Pax Thien, 18, Zahara Marley, 17, and 13-year-old twins Vivienne Marcheline and Knox.