Adding fuel to the dating rumours, actor Angelina Jolie and singer The Weeknd were spotted together at a luxurious Italian restaurant in Los Angeles. 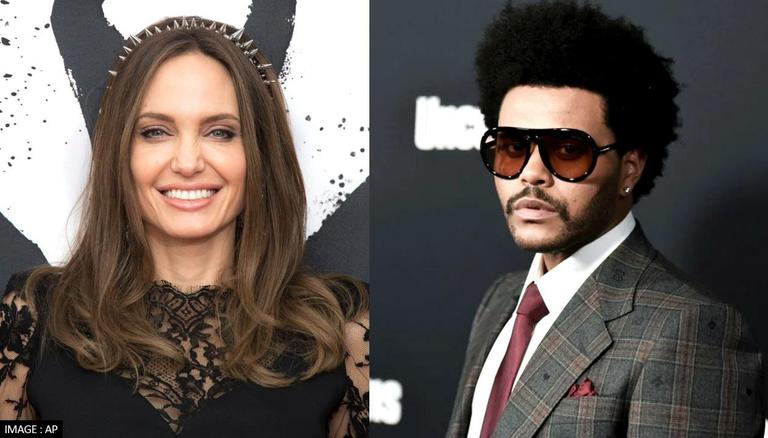 
Actor Angelina Jolie is grabbing several headlines as she will be making her debut in the Marvel Cinematic Universe with the upcoming film Eternals. Amidst the buzz around her film, the actor is also sparking dating rumours with Canadian singer The Weeknd as they were once again spotted having a private dinner at a swanky restaurant in Los Angeles. The dating speculations come amidst Jolie's ongoing legal battle with estranged husband actor Brad Pitt over five out of their six minor kids and their French estate Chateau Miraval.

Angelina Jolie and The Weeknd spotted together

According to a report from Daily Mail, 46-year-old Jolie and 31-year-old Abel Makkonen Tesfaye spent two and a half hours at a luxurious family-run Italian restaurant in Los Angeles on Saturday, September 25. Dressed in a chic ensemble, the actor wore a black double-breasted trench coat and The Weeknd chose to coordinate their outfits by opting for an all-black casual attire. The actor arrived at the restaurant separately, however, the duo was spotted leaving the restaurant together as Jolie was seen getting into the singer's SUV.

This would not be the first time that the duo triggered dating speculations as they were first spotted spending time with each other in June this year, According to the same report, the duo met up at the same restaurant on June 30. In a similar instance, Joli and The Weeknd were spotted attending the same private concert in Los Angeles on July 10 this year.

More on Angelina Jolie and The Weeknd

The Maleficent actor is currently busy promoting her forthcoming Marvel film Eternals featuring Richard Madden, Salma Hayek, Kit Harington, Gemma Chan and more. The movie is set to be released on November 5 in the US and is creating a major buzz for its theatrical release, star-studded cast and lengthy screen time. On the personal front, Angelina Jolie recently reached an agreement of over $164 Million with Brad Pitt over their Chateau Miraval in Correns, France.

On the other hand, Grammy award-winning singer The Weeknd has so far released four albums and recently released his latest single Take My Breath in August.

WE RECOMMEND
Angelina Jolie & Brad Pitt reach an agreement over $164 million French chateau
Brad Pitt files lawsuit against Angelina Jolie involving co-owned French property
Angelina Jolie says she 'feared her family's safety' during marriage with Brad Pitt
Angelina Jolie reveals why she argued with Brad Pitt over working with Harvey Weinstein
Brad Pitt says he has become 'crankier' and his style shifting to comfort as he gets older
Listen to the latest songs, only on JioSaavn.com