'Bullet Train' which is set to feature an ensemble star-cast, recently unveiled the first look for the film starring Brad Pitt and Bad Bunny. See below - 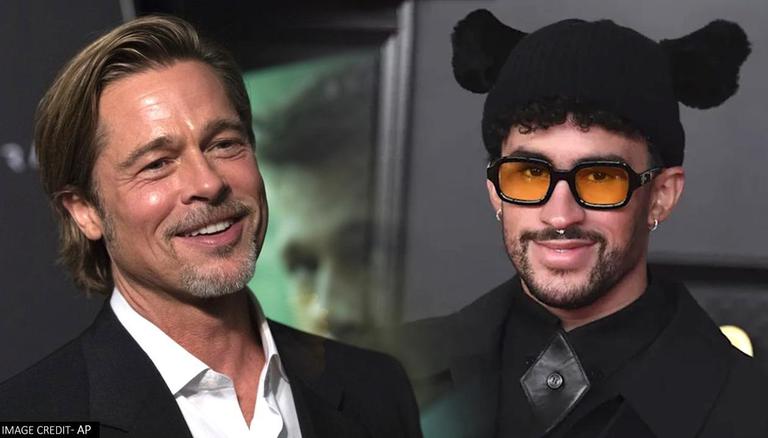 
Brad Pitt's Bullet Train, which is all set to come to the big screen soon, recently unveiled the first look for the upcoming film at CinemaCon. The recently revealed first looks reportedly featured Brad Pitt and Puerto Rican rapper Bad Bunny. Here's all we know about the upcoming film -

Puerto Rican rapper Bad Bunny is all set to appear with Academy Award-winner Brad Pitt in the upcoming Bullet Train. The duo is slated to play assassins in the upcoming film and was seen going 'head-to-head' with one another in the recently released first look. According to Variety, Pitt and Bad Bunny were "seen slapping each other and tussling over a briefcase" in the recent footage shown at the CinemaCon in Las Vegas.

READ | How Brad Pitt was convinced by David Pincher to read the screenplay of 'Fight Club'?

The rapper's character will reportedly be a "formidable opponent" of Pitt's character, who is called Ladybug. No footage from Bullet Train has been made available yet.

The Brad Pitt-led Bullet Train has been directed by Deadpool 2 director David Leitch. According to People.com, "the movie follows five assassins on a high-speed bullet train who realize their assigned targets are related." The film is reportedly based on the book Maria Beetle by Kōtarō Isaka and is a Japanese book.

READ | Are Brad Pitt and Andra Day dating? Actor finally clears the air about their relationship

While speaking to the Vulture back in March, a stunt coordinator named Greg Rementer mentioned that Pitt had done "95%" of all of his physical stunts in the film. The stunt master was all praises for Pitt and said,

He's like a natural-born athlete. He really got in there! Never have I ever done so many huge actors in one feature where all of them excelled at the physical movement of our training. So Brad, Brian, Michael Shannon, Hiroyuki Sonada, Andrew Koji—who was already a stud in terms of where he comes from with the show Warrior—all these actors put out some great action and did a lot of their [own] stuff.

WE RECOMMEND
Angelina Jolie Gives Icy Death Stare To Fan Recording Her At Hollywood Bowl; check out pic
K-pop band BTS' V beats Hrithik Roshan, Robert Pattinson as 'Most Handsome Man 2021'
Brad Pitt gets support from ex-wife Jennifer Aniston after domestic abuse allegations
When Brad Pitt admitted to have suffered from depression and drug addiction due to stardom
DYK Brad Pitt played a cameo in 'Deadpool 2' for a cup of coffee?