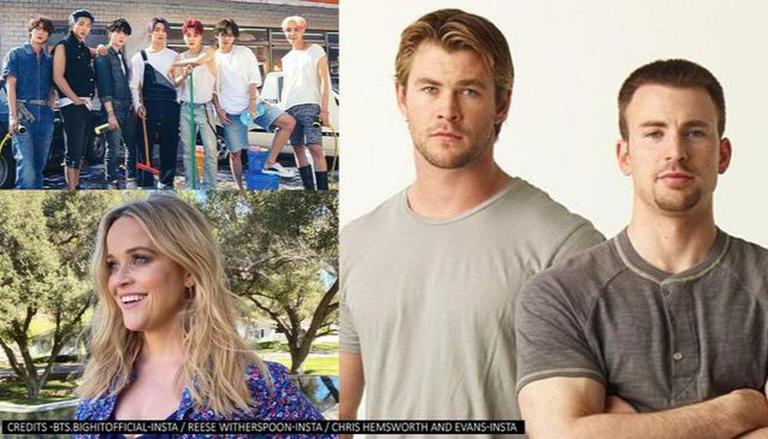 
Social media platforms such as Twitter provide a platform for actors and other prominent figures to interact with their fans and update them about their personal life, upcoming projects and much more. With the advent of technology, social media has become an important part of everyone's daily life. TechShielder recently gathered resources and shared a list of the most loved and most trolled celebs on Twitter and the list was topped by actor/producer Reese Witherspoon and two of MCU's fan favourite actors Chris Evans and Chris Hemsworth. The South Korean Boyband BTS beat all the three actors to become the most loved celeb on Twitter

As per a report by TechShielder Legally Blonde actor made it to the top ten on the list of most loved actors on Twitter. Reese got a 69% share of positive tweets, followed by Thor star Chris Hemsworth, who has a 63% share of positive tweets. Lastly, Chris Evans, aka Captain America, is in third place with 62%. The boyband BTS beat all three of them and secured the top position.  After analysing over 500 of the most recent tweets about the band, TechShielder discovered that a tremendous 73% of them are positive.

Over the past few years, BTS has garnered a huge fan following who call themselves ARMY. In the last 10 months, they have had five different chart-topping hits, beating a record set by Michael Jackson in the late 1980s. That’s not the only record they have beaten this year either; they also scored the longest-running number-one debut on the Hot 100 with their song Butter.

The other celebs on the list also included British food writer and television cook show host Nigella Lawson, along with television personality Paris Hilton. They also shared the most trolled singers on Twitter and singer Demi Lovato topped the charts with 41% of the tweets being negative. Rihanna and Jennifer Lopez took 2nd and 3rd place, each with 37% of the tweets they received being negative. Kristen Bell and Tom Holland topped the charts of the most trolled actors with 39% and 38% respectively.