Chris Pratt took some time off from his schedule and spent some time with his kids Jack and Lyla. He also made breakfast for his wife as her his Insta stories.


Chris Pratt is spending some quality time with his son and daughter. The Guardians of the Galaxy star posted a picture of him spending time with his newborn daughter and his son Jack. After posting this sweet selfie with his kids, Chris Pratt also shared a special breakfast he made for his wife Katherine. Find out more details about Chris Pratt’s family day below.

Chris Pratt has talked about his son Jack on several occasions right from interviews to Instagram posts. Chris recently welcomed a new addition to their family, as his wife Katherine gave birth to their daughter, Lyla. Now, Chris Pratt in his latest Instagram story shared a picture of him with his kids. Chris Pratt not only spends some quality time with his kids but also made a special breakfast for his wife. In his next Instagram story, Chris Pratt shared a picture of a bowl with two soft-boiled eggs, sliced avocadoes, and bell peppers. He also added a few pieces of bread on the side. Along with the picture, he added the caption, “Make wifey breakfast” and of course did not forget to add the green tick. Take a look at Chris Pratt’s story below. 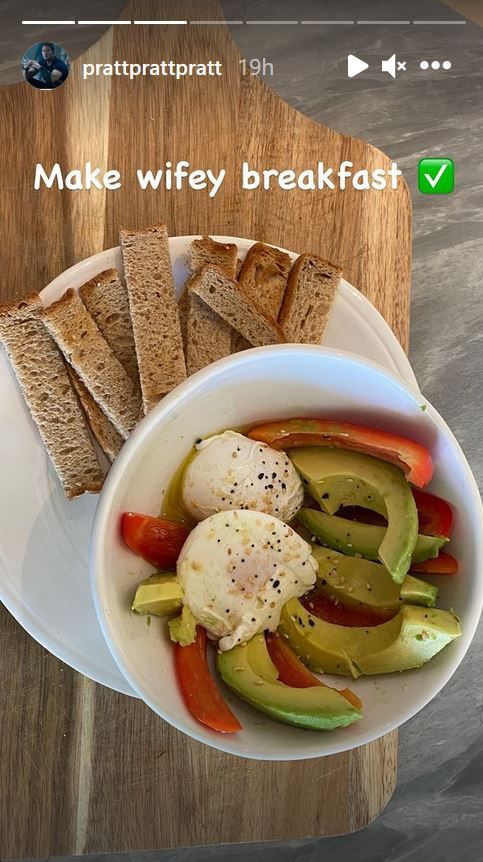 On the work front, Chris Pratt’s brand-new film is on its way to enthral fans. The Guardians of the Galaxy star took to social media and announced the film. He also shared a few stills from the film. Along with this post, he wrote, “Just wait until you see what’s coming. @TheTomorrowWar arrives July 2 on @AmazonPrimeVideo. My first Executive Producer credit on a feature film!! Boy we busted our asses on this movie and I guarantee you have never seen anything like it. It’s so original, scary, moving, funny and visually stunning. AND you can let you kids watch it. (PG-13) Get ready for a new favorite movie. There’s a reason Amazon paid a butt load of money to buy this film. The reason is... Jeff Bezos loves aliens. And also, it’s the best movie you’ll see this year. I promise you. Humbly, this is the one”.