Deadpool Star Ryan Reynolds Sneaked Up On By Mini Deadpool

Ryan Reynolds was sneaked up on by Mariah Carey's son as mini Deadpool. Mariah took to her Instagram to share a picture with Ryan Reynolds and Blake Lively.

It was a fun moment when Deadpool sneaked up on the real Deadpool, as seen on an Instagram picture posted by world-famous singer Mariah Carey. On Sunday, November 17, Mariah Carey took to her Instagram to share a picture of her with the Deadpool actor Ryan Reynolds, Blake Lively, and her kids. In the picture, we can see Mariah Carey’s son Rocky in a Deadpool mask posing with his hands crossed. Here is all you should know about it.

Deadpool sneaks up on Deadpool?

In this picture, we can see all the stars and Mariah Carey’s kids posing. In the caption, Mariah Carey wrote that “Rocky snuck up on an unsuspecting couple wearing a Deadpool mask. Will they ever recover? 😉💖”. By this, viewers can infer that the movie had a great impact on her kid and he loves the character of Deadpool. Ryan Reynolds also commented on the post by writing how his vision board has become a real picture. 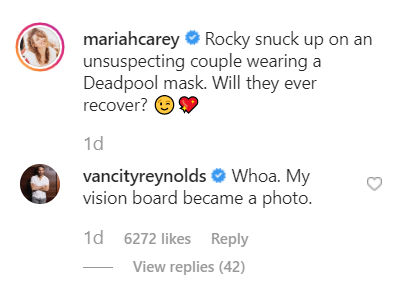 Ryan Reynolds is best known for his role as the Marvel’s antihero Deadpool form his 2016 movie Deadpool. He also did a sequel to the movie in 2018 which was one of the best R rated superhero movies till this year’s Joker took over it. It was the first R rated movie in the X-Men universe. Deadpool is a character who knows that he is a comic book character and has ofter broken the fourth wall to entertain his fans in a similar way. This picture also shows how the character is loved by fans and is ready to break the fourth wall.

Here are a few fun Deadpool posts that Ryan Reynolds has shared on his Instagram: