Drake Hurt After Father Dennis Graham's Statement About Their Relation

Canadian rapper Drake reacted to his father Dennis Graham's statement made on October 4 about their estranged relationship and told the fans that he was hurt.

Canadian rapper Drake reacted to his father Dennis Graham's statement made on October 4 about their estranged relationship. He told the fans on October 8 that he has been deeply hurt by his father after Dennis accused Drake of lying about their relationship in his music. On his Instagram handle, he wrote, "Woke up today so hurt man. My father will say anything to anyone that’s willing to listen to him. It’s sad when family gets like this, but what can we really do [?] that’s the people we are stuck with.” The rapper then continued, "every bar I ever spit was the truth and the truth is hard for some people to accept.” 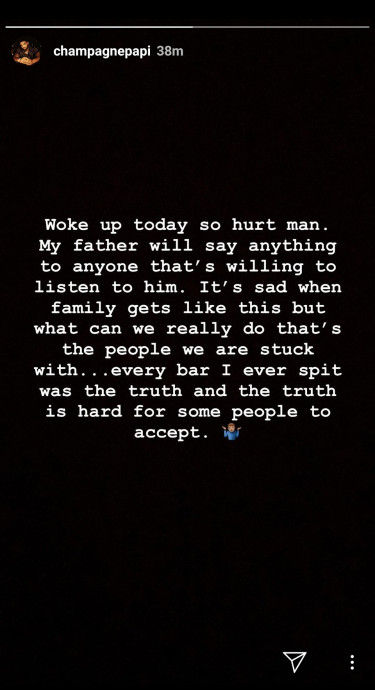 The reaction of the 32-year-old rapper was prompted by Graham's recent interview where he told that his son admitted to fabricating details about their relationships to sell records. The Grammy award winner had previously rapped about Graham's past alcoholism and being an absentee father on several occasions. When the host of the show asked the rapper's father about him and their complicated relationship, Graham said he felt Drake has sensationalized that aspect of his life. He said he has always been with Drake and supported him. He added that he talked to him every other day and they really get into very deep conversations. He also asked Drake about why is he saying different stuff about him and he replies to his father that it sells records.

Aubrey Drake Graham is a Canadian rapper, singer, songwriter, actor, and businessman. Drake gained recognition as an actor on the teen drama television series Degrassi: The Next Generation in the early 2000s. He was interested to pursue a career in music, he left the series after releasing his debut mixtape  Room for Improvement. He released two further independent projects, Comeback Season and So Far Gone, before signing to Lil Wayne's Young Money Entertainment on June 2009.