New stills of Henry Cavill as Sherlock Holmes from the sets of Netflix's 'Enola Holmes2' have been shared by netizens on the internet. See Pics. 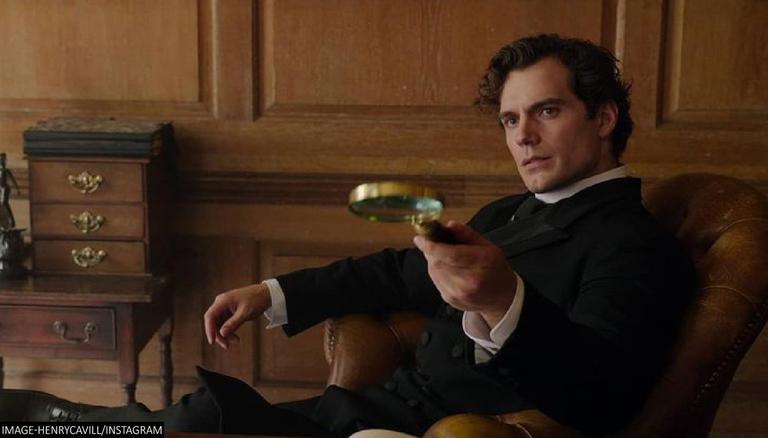 
Henry Cavill will be reprising his role as the iconic detective Sherlock Holmes in Enola Holmes 2. The filming of the mystery thriller is underway and new photos of Cavill from the sets have been making their rounds of the web. Enola Holmes also stars Millie Bobby Brown as Sherlock Holmes' little sister alongside Sam Claflin and Helena Bonham Carter.

Henry Cavill was spotted on set for the first time while filming scenes for the upcoming movie Enola Holmes 2 on Monday. The Superman actor looked trim and neat in a black wool coat while sporting his natural curls in-between takes of the Netflix sequel. Reprising his role as Sherlock Holmes, Cavill will grace the small screen alongside the likes of Helena Bonham-Carter, Sam Claflin and Millie Bobby Brown, who all play the part of the Holmes clan.

New pics of Henry in the set of #EnolaHolmes2 today. pic.twitter.com/2wAUb7ATnz

The first movie in the series chronicles the teenage sister of the already-famous Sherlock Holmes, Enola Holmes, who travels to London to find her missing mother but ends up on a thrilling adventure, pairing up with a runaway lord as they attempt to solve a mystery that threatens the entire country. The movie was originally planned for a theatrical release by Warner Bros. Pictures, the distribution rights to the film were picked up by Netflix due to the COVID-19 pandemic. Enola Holmes released on September 23, 2020, and received positive reviews from critics, who praised Brown's performance. It became one of the most-watched original Netflix films with an estimated 76 million households watching the film over its first four weeks of release.

Meanwhile, Henry Cavill will next be seen in season two of Netflix's fantasy drama show The Witcher, reprising his role as Geralt of Rivia. The series is based on the book series of the same name by Polish writer Andrzej Sapkowski. Cavill has also been roped in for a lead role in Highlander's reboot which will be helmed by John Wick director Chad Stahelski. He will also be seen in the spy movie Argylle based on the upcoming novel of the same name by first-time author Ellie Conway. The movie also stars  Sam Rockwell, Bryce Dallas Howard, Bryan Cranston, Catherine O'Hara, John Cena, Samuel L. Jackson, Dua Lipa, and Ariana DeBose.

READ | 'The Witcher': Henry Cavill hints at a more paternal side of Geralt in season 2
READ | Henry Cavill to reprise his role as Superman in DCEU's 'Supergirl' movie?