'Eternals' producer, Nate Moore recently discussed who was stronger the Eternals or Captain Marvel. The movie is set to release in India on November 5. 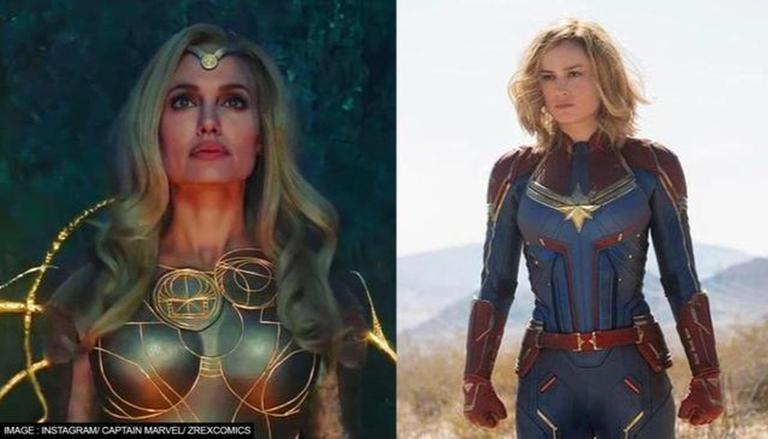 
Producer of the upcoming MCU movie Eternals, Nate Moore, spilt beans on who is stronger Carol Danvers aka Captain Marvel or the Eternals. The movie directed by Chloe Zhao will be introducing ten new superheroes who belong to an alien species called the Eternals. Meanwhile, Brie Larson as Captain America was introduced in the standalone 2019 film and quickly became one of the most powerful superheroes of MCU. Ahead of the release of Eternals release Moore teased fans about the upcoming movie and revealed who is more powerful Eternals or Captain America.

In an interview with Screenrant, the movie's producer Nate Moore describes Angelina Jolie's character of Thena as Captain America with cosmic powers. He said, "I mean, when Captain Marvel goes binary, that is tough, but it would be as if Captain America-- who I would argue is probably the best physical fighter-- was powered by cosmic weapons, like, she's going to be a problem, but again, Captain Marvel going binary, that's tough. [...] I mean, look, they're obviously stronger than humans."

Moore added, "I think you look at our amazing heroes, like Hawkeye and Black Widow wouldn’t have a problem. We didn't want them to be too godlike because I do think you run the risk of them being less relatable."

READ | Ahead of its release, Marvel drops new posters of Angelina Jolie starrer 'Eternals'
READ | Chloe Zhao says 'Eternals' will 'shape the future of the MCU' and expand the mythology