Hilary Duff showed her kids 'Lizzie McGuire' movie at their home before starring in its reboot. Video of the incident was captured by her fiance Mathew Koma.

American actress, singer, songwriter, and author Hillary Duff who shot to fame in her teenage with the sitcom Lizzie McGuire recently made her kids watch the show. The video of Hillary watching Lizzie McGuire with her babies was posted by her fiance Matthew Koma on his September 29 Instagram story. In August, Duff announced that she would be reprising her character in an upcoming reboot of the show.

Read: Justin Bieber And Hailey Baldwin Get Married For The Second Time

Duff's love for the family

Hilary Duff watching The Lizzie McGuire Movie with her boyfriend and 2 kids 😭 pic.twitter.com/7J6Kc3fqWw

In the short video, Duff can be seen laughing while her two children, 7-year-old son Luca and 11-month-old daughter Banks, stare at the screen watching their mother sing 'The Tide Is High' in the movie's opening scene. Koma, Duff's fiance can be heard saying jokingly, "Yup" in the background while Duff sings "every girl wants you to be her man," in the popular 2003 movie. On September 28, the family also celebrated Duff's birthday. She turned 32 this year to which her beau threw her a jungle-themed birthday party, complete with a live monkey.

"I asked to meet a monkey for my 32 birthday and of course Matthew made my dreams come true," Duff shared on her Instagram Story. 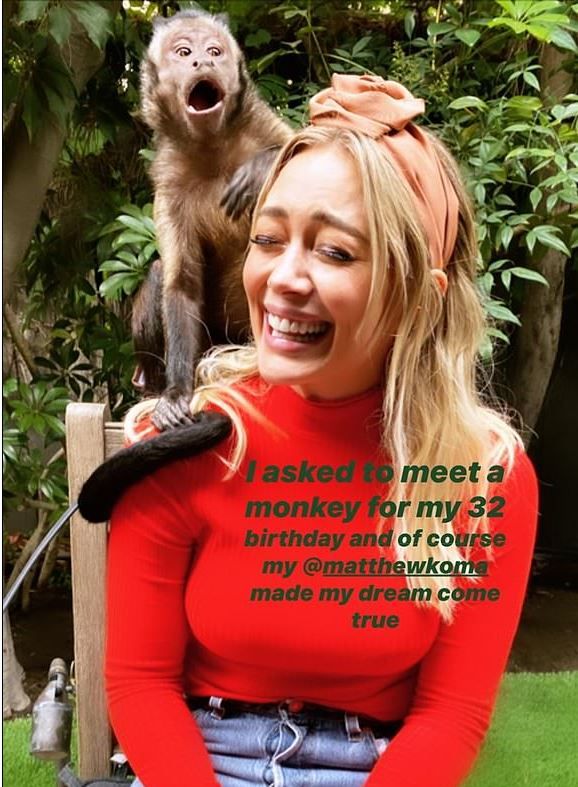 Speaking on the LizzieMc Guire screening with her family to US media, Duff said, "I recently started talking to him about Lizzie McGuire and showing little clips on YouTube. I think he's pretty fascinated to see me so young, not looking the same, but obviously he knows that's his mom. I think that he thinks I'm cool now, which is awesome. I'll take that for as long as I can have it".

Lizzie McGuire was originally aired from 2001 to 2004 which was a Walt Disney show. The story followed a 13-year-old girl called Lizzie McGuire, who dreamt of being popular in school, as her animated alter ego represented her true feelings. Its popularity led to the making of the film, 'The Lizzie McGuire Movie', where Lizzie went on a trip of a lifetime to Rome, Italy, following her 8th-grade graduation and got mistaken for a pop star. The reboot will Lizzie as a 30-year-old who works as an apprentice to a fancy New York City decorator. Taling to the media, Duff said she felt it was the right time for her to make her come back as Lizzie. 'The Lizzie McGuire' reboot will be aired on Disney+, which launches on November 12.

"I think it's the right time to set back in and have her go along with you in your 30s and all the fun times, and all of the big monumental moments, and all of the challenges that you're faced with," she said.