Kylie Jenner recently celebrated her birthday and shared glimpses of her party on social media making fans speculate about her pregnancy. Read on. 
Kylie Jenner is one o the popular American artists who enjoys a massive fan following around the world. As she recently celebrated her 24th birthday and gave a sneak peek into it to all her fans on social media, they began wondering if Kylie is pregnant or not. Many fans took to social media and dropped in their opinions stating whether she is pregnant or not.

Kylie Jenner recently took to her Instagram handle and shared a series of her photos in which she was seen wearing a green coloured bodycon dress while holding a glass of champagne in her hand. The fans began to speculate about her pregnancy when she shared pictures with differently done nails. It also caught the eyes of the fans that none of the other people present at the party was seen in her photos nor did anyone of her close ones posted anything recently. Some of the fans believed that she was hiding her pregnancy by posting old pictures of herself that were explained by her changing nails.

One of the fans also posted a video clip highlighting how Kylie’s nails changed in her birthday celebration glimpses. Many other fans took to Instagram and expressed their feelings on how this made them feel suspicious about her pregnancy while some others stated that she was not pregnant. One of the fans also backed Kylie Jenner by stating that it was okay for her to change her nail colour often as she is rich while some others were confused about it and asked others to help them crack this code. Some of the fans were quite sure that she was pregnant and dropped in the comments about how they knew that she was, on the other hand, some fans clearly denied the fact that Kylie was pregnant. Take a look at how the fans reacted to it. 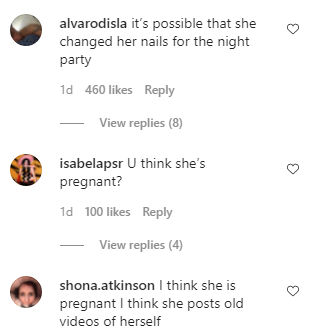 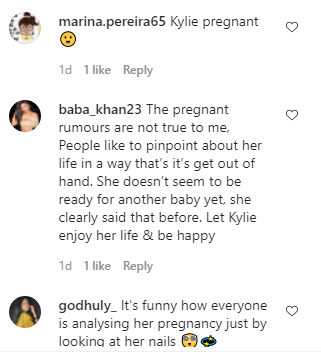 Kylie Jenner began dating Tyga in 2015 and appeared in a couple of music videos together. Their relationship lasted for around two years as they broke up in 2017. She then began seeing Travis Scott and soon gave birth to their daughter, Stormi Webster after one year of relationship. She recently broke up with Travis but they are continuing to co-parent their daughter.

READ | Kylie Jenner Birthday: Have a look at model-turned-billionaire's cameo in music videos
READ | On Kylie Jenner's Birthday, have a look at her most jaw-dropping transformations; see pics