Keeping Up With The Kardashians Reunion: Kourtney Opens Up About Her Breakup With Scott

The trailer of the Keeping Up with the Kardashians Reunion Special gives a glimpse of Kourtney Kardashian talking about her break-up with Scott Disick. Read on. 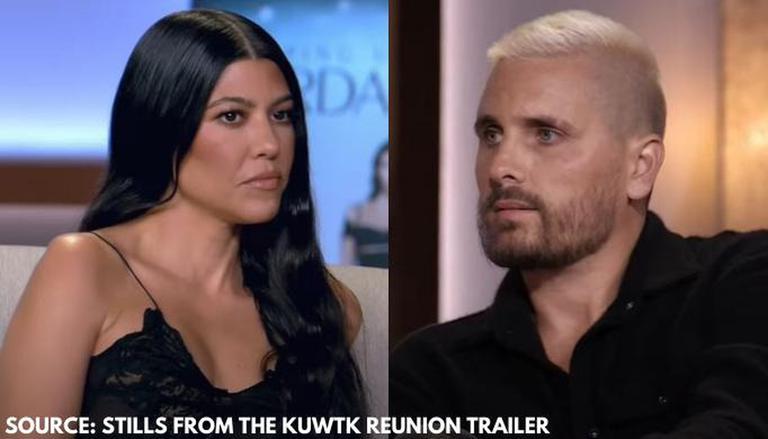 
While the TV show Keeping Up With The Kardashians is coming to an end, a reunion special episode of the show has already been planned to air, a week after the show’s final episode. In the KUWTK Reunion trailer, which will be hosted by Andy Cohen, there is a glimpse of Kourtney Kardashian opening up about her break up with her former boyfriend, Scott Disick, with the latter being present there. Read on to know what she shares in the trailer.

In the Keeping Up With The Kardashians Reunion trailer, host Andy Cohen does not seem to be holding back on the level of questions that he would be asking the Kardashian-Jenner family. One of his questions, in the trailer, to Kourtney is, “Do you think your relationship [with Scott Disick] would have turned out differently if you hadn’t shared so much of it?” To this, Kourtney shares what affected her break-up the most, saying, “Probably. But I think the substance abuse was the deal-breaker.” Scott Disick, who is also present there at the moment, agrees to it, and says, “I was pretty irresponsible.” Disick has had problems with drug abuse in the past, which was also shown in the series, and he has also been to rehabilitation multiple times. Later, Andy Cohen also asks Scott about Kourtney’s current relationship with drummer Travis Barker.

Keeping Up With The Kardashians finale

The final episode of the 20 season-long show, will be airing today, 10 June, on E! The final season of KUWTK had begun airing on March 18, and it was in September 2020, that the family had announced on their Instagram that season 20 will be the last season of the show.

Keeping Up With The Kardashians reunion special

The KUWTK reunion special episode will premiere on E! a week after the series finale, that is, on 17 June. The trailer of the reunion special was also released on the official YouTube channel of the show. Hosted by Andy Cohen, the reunion will feature Kim Kardashian West, Kourtney Kardashian, Kris Jenner, Kylie Jenner, Kendall Jenner, and Khloe Kardashian as the prominent guests, with other members of the show also making appearances.