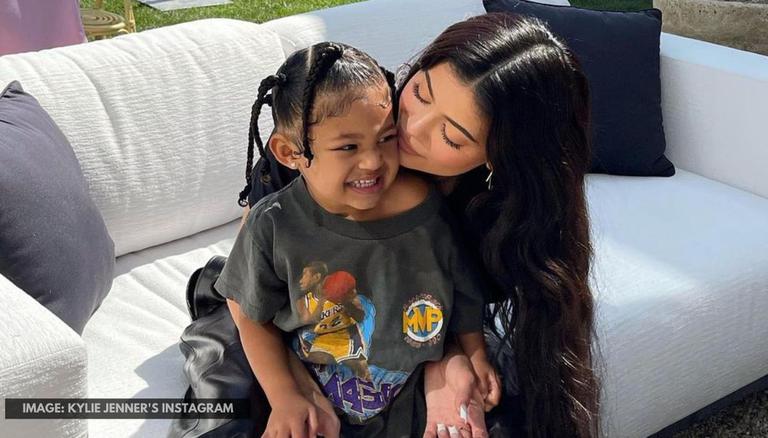 
Beauty mogul Kylie Jenner recently got into an aww-dorable banter with her munchkin Stormi Webster as she gave the toddler her sunscreen to apply on her dolls. On Tuesday, the Keeping Up With The Kardashians star took to her Instagram handle to share a cutesy video, wherein her darling daughter had sunscreen all over her hands and legs, along with her "dolly". Ahead of that, Stormi also helped her "mommy" unbox a new pair of 3-D printed hot pink pumps by Balenciaga.

Kylie Jenner and her bundle of joy, Stormi Webster, never leave an opportunity to shell out major mother-daughter goals for netizens on social media as the founder of Kylie Cosmetics often shares some lovely photographs and videos with the 3-year-old on social media. The 23-year-old also keeps fans updated with her and Stormi's whereabouts through her Instagram Stories by posting some candid videos of herself with her daughter to give fans a peek into their life. Similarly, yesterday, i.e. June 8, 2021, Kylie took to her Instagram Stories to share a streak of videos of her child and revealed how they spent their day.

In one of the videos, Kylie Jenner and Travis Scott's daughter could be seen helping the former out with unboxing the PR packages she recently received. In the following hilarious videos, the beauty influencer revealed how Stormi borrowed her sunscreen to apply it to her dolls. In the video, Kylie is heard asking her, "what did I say Stormi?", while the toddler quipped, "Mommy, let's go wash my hands off" as the socialite panned the camera on Stormi's dolls lying on the floor, covered with sunscreen.

Not so long ago, Kylie and Stormi celebrated Memorial Day 2021 with rapper Travis Scott's family in Houston. During their stay in the city of Texas, the former couple had a fun water-balloon fight with each other, which the Kar-Jenner sister documented on Instagram. In the videos, Stormi and her beloved dad teamed up to take on the makeup mogul, who ran away to dodge the balloons while filming their playful fight.