Netflix's Spanish heist crime drama La Casa De Papel popularly know as Money Heist has gained a lot of viewers in recent times. The series has gained a tremendous amount of viewership so much so that the streaming giant has already brought 4 seasons of the hit series to date with season 5 in the making. With the fans of the series eagerly waiting for any update about Money Heist season 5, Alvaro Morte's recent post from the sets of the drama was surely a treat to the fans.

Alvaro Morte who plays the role of the Professor, the leader of the gang and the brain behind the heists recently took to his Instagram handle to share a picture from the sets of Money Heist Season 5. The actor shared a selfie in which he is seen wearing the typical Professor costume consisting of a grey shirt and a black tie with round spectacles completing his look. The actor is just showing half his face in the picture and is holding what seems to be a coffee in his hand. Along with the picture, Alvaro wrote, "Sunny day at the office" followed by #lcdp5 which stands for La Casa De Papel 5, the original Spanish name of the series.

Fans of the series were thrilled to get a peek into the sets and took to the comment section of the post to share their love for the series and to ask questions about when is season 5 releasing. One user commented, "Yayy! can't wait" while another wrote, "You're wonderful." Read some of the fan comments below;

READ | What time does Sky Rojo release on Netflix? Money Heist makers come back with a new series 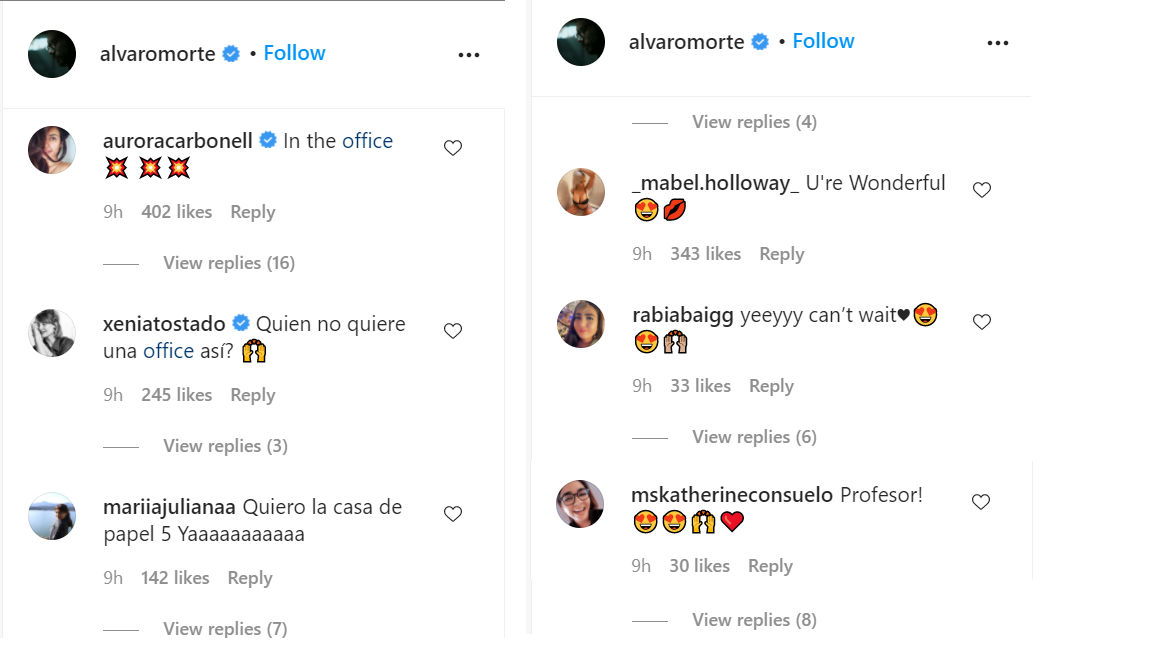 The news of Money Heist renewing for season 5 was made recently much to the delight of the fans. According to The Sun, the actors are currently filming for the drama in Madrid, Spain. The creator of the show Álex Pina dropped a few hints about Money Heist Season 5 release date. According to him, the series will be released only after September 2021 and not before that. Talking about what people can expect from season 5 of the heist drama, Álex shared that some people would be disappointed with the season finale but he also mentioned that they have tried to make the climax fair for the characters. Actors who have confirmed that they will be returning to the fifth season include Alvaro Morte as Professor, Ursula Corbero as Tokyo, Itziar Ituno as Raquel Morillo, Jaime Lorente as Denver, Darko Peric as Helsinki, Pedro Alonso as Berlin, Miguel Heran as Rio, Esther Acebo as Stockholm and Mario de la Rosa as Suarez. Alex also teased that they are adding new characters to the plot.

For the unversed, Money Heist was picked up by Netflix in 2017 and has a total of four seasons as of yet. The series has bagged the Emmys for Best Drama and has also won several other accolades. The official synopsis of the series on IMDb reads, "An unusual group of robbers attempt to carry out the most perfect robbery in Spanish history - stealing 2.4 billion euros from the Royal Mint of Spain." The series has covered two major heists till now on on the Royal Mint of Spain and another one on the Bank of Spain. One of the series favourite character Nairobi played by Alba Flores died in the previous season during the heist.