Timothée Chalamet starrer sci-fi movie 'Dune' was released on October 22. Writer Stephen King left a review of the movie via his Twitter. 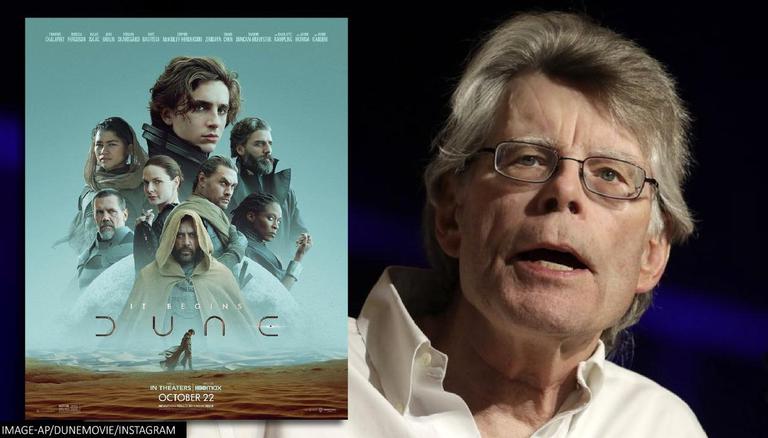 
Denis Villeneuve's epic sci-fi movie Dune was released earlier this month on October 22 and reportedly became Warner Bros.'s most successful release since 2019’s Joker. The movie based on Frank Herbert's 1965 novel stars Timothée Chalamet in the lead role as Paul Atreides. The movie was praised by both critics and audiences alike for its cinematography, visual effects, and sound design. Famous horror novel author Stephen King also left a review for the movie and called it 'really good'.

Stephen King, best known for his horror and supernatural fiction novels, left a review of the movie Dune on his Twitter. King wrote that the movie was long but good while adding a bit of political aspect. He wrote, "I watched it with my wife this afternoon. Really long but really good. Hard to believe we can do all these amazing special effects and still not achieve world peace."

I watched it with my wife this afternoon. Really long but really good. Hard to believe we can do all these amazing special effects and still not achieve world peace. https://t.co/langJ7mkai

Dune follows Paul Atreides played by Timothée Chalamet), as he and his family fight for survival on the desert planet Arrakis. The movie is planned to be split into two parts and Dune is the first of a planned two-part adaptation. However, a sequel for the movie hasn't been confirmed by the studio yet. The movie features an ensemble cast that includes Rebecca Ferguson, Oscar Isaac, Josh Brolin, Stellan Skarsgård, Dave Bautista, Stephen McKinley Henderson, Zendaya, David Dastmalchian, Chang Chen, Sharon Duncan-Brewster, Charlotte Rampling, Jason Momoa, and Javier Bardem.

As per reports by AP, the film debuted with $21.6 million in China, where Legendary and Wanda handled distribution. In total, Dune added $47.4 million internationally for a global cumulative gross of $220.7 million. Despite having a hybrid release Dune was a commercial success. The official synopsis of the movie reads- "A mythic and emotionally charged hero’s journey, “Dune” tells the story of Paul Atreides, a brilliant and gifted young man born into a great destiny beyond his understanding, who must travel to the most dangerous planet in the universe to ensure the future of his family and his people. As malevolent forces explode into conflict over the planet’s exclusive supply of the most precious resource in existence—a commodity capable of unlocking humanity’s greatest potential—only those who can conquer their fear will survive."