Veteran Beatles Artist Reveals What Led To His Viral Sketches

Veteran Beatles artist reveals what led to his viral sketches posted by Rebecca Louis Front, his daughter. Charles Front, 89, is studying on FutureLearn

English actor, writer, and comedian Rebecca Louise Front have recently shared photographs of a few sample pages from her father's sample studies on her Twitter account. What's special about the images is that her father has neatly penned mini-portraits of key historic figures along with the notes. The act is quite are chastening for all those students who claim that taking proper notes is a waste of time. Setting the right example for students who do mindless doodling, at the age of 89, the late-life learner Charles Front is setting a better example with his diligent, captivating revision notes. Rebecca's dad is a retired illustrator best known for designing the title of the Beatles album Rubber Soul.

Thousands have lauded Charles' clarity and artistic flair. Rebecca, who played hapless government minister Nicola Murray in the BBC political satire The Thick of It, and Kevin Whately’s boss in Lewis and her brother actor Jeremy, adapter of Simon Brett’s Charles Paris murder mysteries for Radio 4, have always appreciated their father’s talent but have both been “flabbergasted” by the response to the drawings. Stars to praise Front’s scholarship include Mark Gatiss, Maria McErlane, Tracy-Ann Oberman, Adrian Lester, and Samantha Spiro, who plays Rebecca’s screen sister in the sitcom Grandma’s House. Novelists AL Kennedy and Stella Duffy are also part of the list. Even British celeb Lenny Henry is among the many celebrity admirers of his skills.

“Wow. It’s making me want to learn calligraphy and do a drawing class and be a better person, dammit! Fantastic,” tweeted Henry last week. 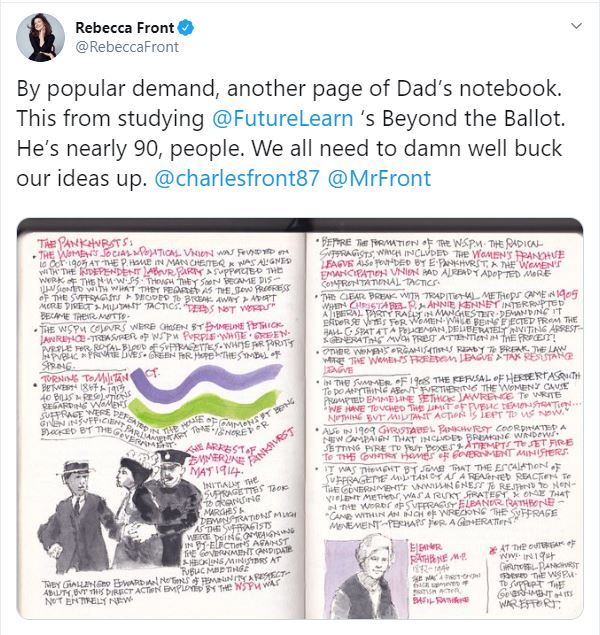 Charles responded to the praise

The veteran illustrator who lives in Muswell Hill, north London, is amazed by the scale of the response to his work. In an interview with the UK media, he said that he could not believe it when Rebecca told him how many people had seen his pages. He added that he is a bit bemused. Speaking on the reason behind his miniature portraits and calligraphy, he said that he draws pictures on the pages to help himself when he looks back and not because he is a teacher’s pet. Adding examples to the miniatures, he said that if he draws the face of Stanley Baldwin or Bonar Law, then he finds he can remember more.

Front is taking up various online courses on FutreLearn

Front has been taking up various online courses with FutureLearn, a company part-owned by the Open University. He first attained a full degree in the history of art with the OU and is now taking up shorter courses. Citing the courses in line, Front said that he took up, astronomy, antisemitism, Rabbie Burns and Samuel Taylor Coleridge, England in the time of Richard III and another on the literature of English country houses. Picking his favourite among them, Front said that ‘Music: from Notation to Performance’ is his favourite although he doesn't play an instrument. He loved it because he loves music and once used to sing with Oscar Rabin and his big band. He added that Oscar had heard him singing in the style of Danny Kaye and so asked him to join them. Adding more about his ventures in online courses, Front said that even his wife Sheila does FutureLearn courses and helps him in his courses.

Charles career in calligraphy and illustrations

Charles Front started his career with advertising in the 1960s, after his studies at art school. Later, he moved into an illustration in the publishing industry, producing a series of books with his wife Sheila, 84. His work on the cover of Rubber Soul remains a claim to fame. Yet the real reason for the warmth of the reaction to his notebooks may lie elsewhere in Front’s back catalogue. The reason why his miniatures are familiar is that he once drew illustrations for the children’s series Jackanory and Playschool.