Where Was 'Dumb And Dumber' Filmed? Know The Filming Locations Of The 1994 Comedy Film

Dumb and Dumber is a 1994 comedy film starring Jim Carrey and Jeff Daniels in the lead. Scroll on to find where was Dumb and Dumber filmed, its plot etc. 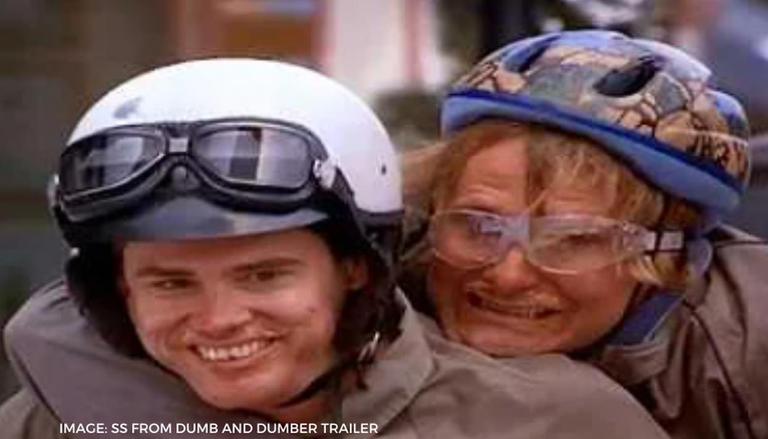 
The 1994 American comedy film, Dumb and Dumber starring Jim Carrey and Jeff Daniels still manages to leave the audience in splits with its impeccable comedy timing and the ace performances of the cast. The movie is directed by Peter Farrelly who also co-wrote the film along with Bobby Farrelly and Bennett Yellin. Scroll to find out more details about the movie like where was Dumb and Dumber filmed, its plot, its review etc.

About Dumb and Dumber plot

The movie revolves around the premise of Harry and Lloyd played by Jeff Daniels and Jim Carrey, respectively, who travel from Providence to Aspen, to return a money-packed briefcase to Mary Swanson essayed by Lauren Holly. Harry and Lloyd are dumb but well-meaning friends who think that the briefcase was abandoned as a mistake though it was actually left as ransom money and travel cross country to give the bag to Mary on whom Llyod has developed a crush.

About Dumb and Dumber filming locations

According to MovieLocations.com, most of the film was shot in Colorado and Utah. The lavish Danbury Hotel, in which Harry and Lloyd stay after getting their hands on the case of money, is actually the Stanley Hotel, 333 West Wonder View Avenue, Estes Park in Colorado. Here is an image of the Stanely Hotel.

READ | Jim Carrey opens up about his struggles before success; says he was "singing and dreaming"

The airport which was shown as the Providence airport where Llyod drops Mary for her flight and she drops a bag in the terminal was shot at the Salt Lake International Airport in Utah.

The New England mansion of Mary Swanson which was shown to be in Aspen is actually La Caille, a 20-acre estate built in 1975, at Quail Run, Little Cottonwood Canyon in the city of Sandy. in Utah. Here is a scenic shot of Mary's luxurious hose in Dumb and Dumber.

READ | If you loved Jim Carrey's 'Eternal Sunshine of the Spotless Mind', watch these films next

Most of the portions in which the characters were travelling on road were shot around Fort Morgan which is located in the eastern plains of Colorado. The scene in which Harry and Lloyd reach Aspen finally was filmed in Breckenridge in Central Colorado which is at a slightly higher altitude, therefore, more likely to be snow-covered the way Aspen usually is and the mini-bike ride that the duo went on in Aspen was also shot in the Main Street, Park City in Utah.

A look at Dumb and Dumber review

The movie has developed a cult following ever since its release in 1994. It was a huge success and grossed over $247 million at the box office. The movie proved to be a breakthrough for the Farrelly brothers as well as for Jim Carrey. After Dumb and Dumber, Jim was claimed to be one of the most prominent actors in the 90s'. The movie has a rating of 7.3 stars on IMDb with over 3 lakh public ratings and 84% on Rotten Tomatoes with over 2.5 lakh audience ratings. The movie also had a sequel titled Dumb and Dumber To which released in 2014.