(G)I-DLE’s Minnie, BLACKPINK’s Lisa and TWICE’s Mina and Jihyo came together and shared their adorable pictures posing cutely together. Take a look. 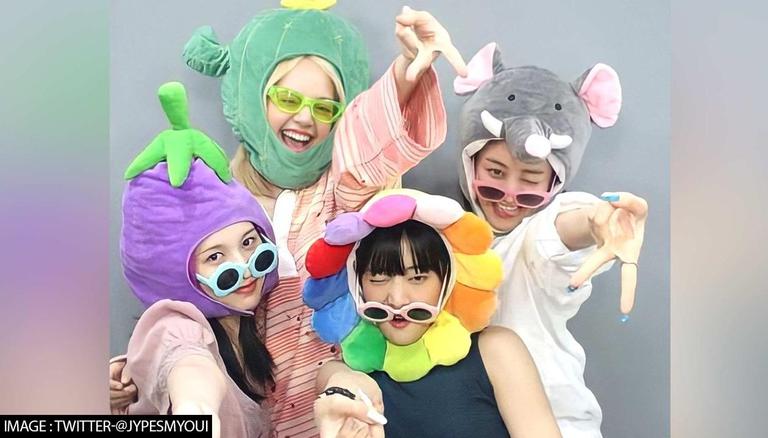 
Even though K-pop idols stay busy with their hectic schedules, they still manage to take out time to catch up with their idol friends from fellow music groups. This interaction always manages to melt the hearts of their fans and recently, a similar interaction between (G)I-DLE’s Minnie, BLACKPINK’s Lisa and TWICE’s Mina and Jihyo, was seen as they came together and shared their adorable pictures posing cutely together.

This has excited K-pop fans worldwide.

On June 22, Minnie took to her Instagram and shared a bunch of pictures with her close friends Lisa, Jihyo and Mina. In the shared post the singers are seen posing in a photo booth, hugging each other and showing cute hand signs to the camera.

They are also seen wearing goofy headbands and sunglasses. Minnie captioned the picture in Korean saying ‘SoHwakHwaeng’ which means ‘small but certain happiness’ and ended the caption with rainbow and heart emojis.

The pictures instantly surfaced all over social media and received a lot of love from fans all over the world. This endearing interaction between the K-pop stars pleased their fans a lot as in no time, they started sharing the pictures with hashtag of ‘Lisa’ all over Twitter.

Lisa was also recently spotted attending (G)I-DLE’s World Tour 2022 ‘Just Me’ concert in Seoul. She interacted with the group members backstage, and those pictures went viral as well.

READ | BLACKPINK's Jennie sets the internet on fire with her latest photoshoot pics; have a look

The bond of K-pop girls is often seen by fans as they frequently attend each other’s concerts and show support by posting and congratulating each other. Their friendship is quite strong even though they all belong to different countries. While Jihyo is from South Korea, Lisa and Minnie are from Thailand, meanwhile Mina is from Japan, however, all four of them are 1997 liners.

On the work front, Lisa is busy with BLACKPINK’s much-awaited comeback this year and is also busy with her personal projects with various brands. She was recently seen attending the launch event of a luxury brand.

Meanwhile, Mina and Jihyo just celebrated TWICE’s success of their most recent album Formula of Love and their World Tour in the USA. Minnie, on the other hand, is busy with (G)I-DLE’s 2022 World Tour ‘Just Me’.