BTS' Jin's shower playlist, which he revealed recently, has taken over the internet with the BTS ARMY having many things to say. Read to find out. 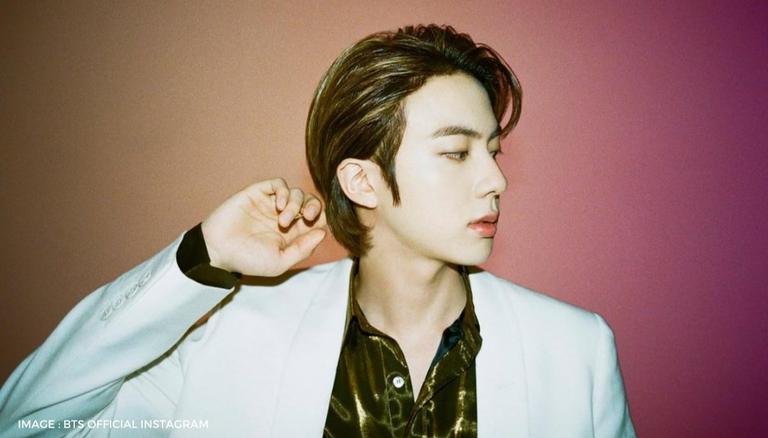 
BTS’ member Jin was recently heard revealing the songs that he prefers to listen to while taking a shower. He appeared on BigHit Music Record on Melon Radio station and shared a shower-specific playlist that he finds enjoyable. It included Bad Guy, In The Morning, IDOL, Left & Right, and many more. Since then, the choice of some of BTS Jin’s songs in the playlist has caused a stir amongst the BTS ARMY online.

One of the songs on Jin's playlist was In The Morning by ITZY, which dropped recently and another was Black Mamba by Aespa. A fan reacted to these songs being on Jin's playlist saying, “Itzy and Aespa in Seokjin's shower playlist. A 4TH GEN GG ENTHUSIAST!” The song Left & Right by SEVENTEEN made it to the list as well. Expressing their happiness about it, “I love to see our worldwide handsome do the dance,” said one of the BTS ARMY members on Twitter. One other person simply expressed their excitement and curiosity about the playlist, stating they wanted to play it while taking a shower themselves. “Do yall have Seokjin's shower playlist I'm gonna take a shower I wanna play it,” they wrote in their tweet.

The only English song on Jin's playlist was Bad Guy by Billie Eilish. Young Tak’s Pitiful was another song on the list, which made a fan ask, “Seokjin actually has this song on his playlist?” Talking about the same song, someone else tweeted about being endeared and sure that Seokjin was surely having a lot of fun while showering. They also spoke about how they had their own shower playlist and would now listen to the one made by him too. Someone simply wanted their favourite, Seokjin, to make a dedicated playlist for just them.

seokjin actually has this song on his playlist?? 😭😭 pic.twitter.com/z2N9xxNMZy

the way seokjin included this on his shower playlist, im just so endeared bet he’s having so much fun in the shower pic.twitter.com/4mH7Bmazi5

i knew i stan the right man, i have my own shower playlist too so im gonna listen to seokjin’s playlist too 🥰 https://t.co/JglsIq6Ivt

BTS ARMY worries about getting hurt in the shower

Another fan wrote, “Seokjin will probably put heat and d-1 in his playlist in the future,” in their tweet regarding the choices of Jin's songs. There was also some humorous twist added to this by some of the BTS ARMY. One person joked about how they feared hurting themselves in the shower, while on the other hand, Seokjin encouraged everyone to dance in there, by giving them his playlist.

Me: seokjin I'm worried about u getting hurt in the shower
Seokjin: *makes an entire playlist to enthusiastically encourage the world to dance in the shower* https://t.co/LRWsgGcn6d

i want seokjin to make a playlist for me

WE RECOMMEND
BTS' Jin makes cozy addition to 'Curated for ARMY' segment, ARMY reacts
Fans trend hashtag in support of BTS' Jin to make him win 'KPOP Visual of the Year 2021'
BTS' Jin Seokjin's top 10 interesting facts that you must check out
BTS' Jin: 'I don’t think there really was a moment when I felt I had arrived as a singer'
BTS' Jin: What Did Jin Do before BTS? Read all about his life & how he got scouted