GOT7 Member BamBam Collab With Red Velvet's Seulgi 'Who Are You' Out; Fans Hail Duo

The most awaited collaboration of GOT7 member BamBam and Red Velvet's Seulgi is out and fans are having a hard time containing their excitement. 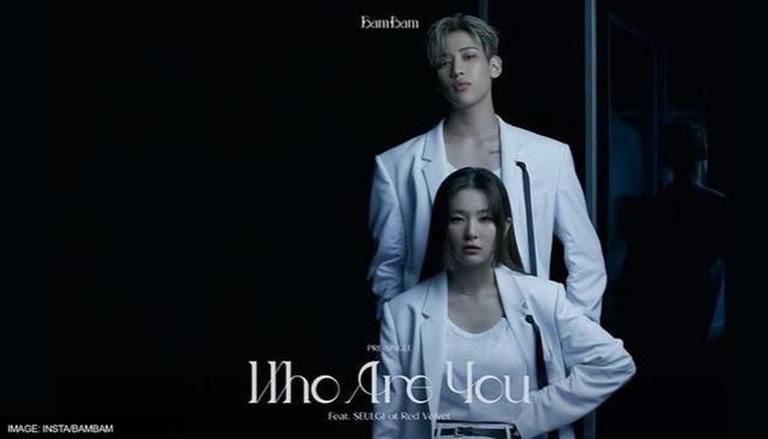 
In a major collaboration between two of the most famous artists of K-pop, Got7's BamBam and Red Velvet's Seulgi released an alluring track titled Who Are You. Known for his powerful rapping skills, BamBam surprised his fans with his soft vocals whereas Seulgi delivered another proof for being one of the top vocalists and dancers in K-pop. Within only a few hours of its release, the track has already found its way to the trending topics list on social media with netizens hailing the duo.

The 24-year-old singer took to his Instagram to announce the release of the music video of his latest track Who Are You in collaboration with Seulgi, 27. The black-themed music video showed off the exceptional dancing skills of both the artists as they engaged in a contemporary dance form for the track. On the other hand, the peppy track was supported with the melodious harmony of BamBam and Seulgi's exceptional vocals and soulful lyrics.

The song makes the beginning of BamBam's second mini-album. As per the credits, the young singer-rapper is responsible for writing, co-producing and mixing the song as well as the producer of the music video.

Netizens' reaction to 'Who Are You'

Dubbed as one of the most highly anticipated collaborations of the year, fans of both the singers as well as their respective groups left positive reviews for the latest track via social media. Subsequently, GOT7 fans, called Ahgase, and Red Velvet fans, called ReVeluv, managed to trend the hashtag #CollabOfTheYear on Twitter. One wrote, ''The genre of the song and choreography suits them both so well!!! Seulgi has always wanted to do the contemporary dance. Thank you @BamBam1A''

THE MOST ICONIC COLLABORATION IN KPOP INDUSTRY EVER😭😭😍 pic.twitter.com/pzW6mVTvYJ

i can understand why u wanted to work with seulgi !! it’s so nice to see you two do this together. it’s really so beautiful, i enjoyed watching and listening to it. i hope we can get a sequel for this 👀#WhoAreYouOUTNOW #WhoAreYou #BamBam @BamBam1Apic.twitter.com/OTUuLjmmrb

One netizen commended Seulgi's performance in the song by writing, ''Seulgi is a true all-around performer. She challenged a new genre again this time around and proved why she's an excellent dancer!'' while another fan wrote, ''They are so elegant and I'm living for it. 3) the visuals, the production. This MV can be easily shown in museum and awards show. Thank you to the first till the last person that took part in it. You've created pure art and maybe you didn't even realize it''

THIS IS WILL BE SONG OF THE YEAR!!!!! FOR REAAAAAAALLL
the song, visual, dance, music video, its a great. you did an amazing work Baaaaaammm, proud of youuuu. Thankyouuuu for both of u💚💚💚💚💚#WhoAreYouOUTNOW

BamBam I’m so proud of you. Your voices blend beautifully together and the dance was gorgeous 🥺🤍

Also this part with the mirror, my face was like this 😧

READ | BamBam has a field day on Twitter as he makes fun of GOT7 band members; Jackson replies