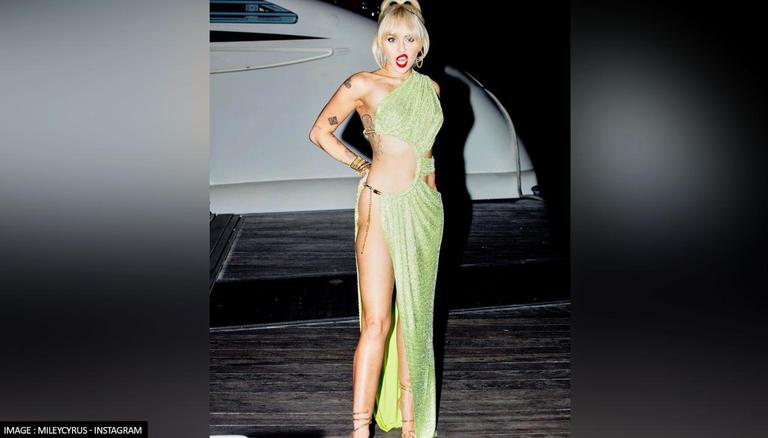 
Miley Cyrus ringed New Year 2022 as she patterned with Pete Davidson for NBC's Miley's New Year's Eve Party on Friday, December 31. As the singer was performing on the stage her stop fell off but Milet skillfully avoided the wardrobe malfunction and continued singing. The singer, who was hosting the live New Year's Eve party was also joined by her sister Noah Cyrus and singer Saweetie.

Miley Cyrus skilfully avoided a wardrobe malfunction while she was hosting Miley's New Year's Eve Party with Pete Davidson on NBC Friday night. The singer had just started singing Party In The USA when her top fell off, the singer quickly turned her back from the camera and audience and put on a red blazer as she continued her performance. As she continued the singer joked and changed her lyrics to, "Everybody's definitely looking at me now."

We know its Miley when she loses her top on Live. #MileysNewYearsEveParty pic.twitter.com/c4t3ewkVUc

As per Insider, as the show ended Miley wished all the viewers and said, "That resilience shouldn't end here. Let's bring that into the new year with us. We've all learned how to expect the unexpected, and rather than see it as a problem, let's see it as an opportunity. I wish everyone here in Miami and everyone watching from home a happy and healthy 2022."

On December 1, 2021, Forbes took to their official Twitter handle and announced the names of Forbes under 30 Class of 2022. Miley Cyrus made it to the list and shared her reaction as she wrote, "FORBES 30 UNDER 30. I turned 29 last week. It was now or never. Thank you for the honour. @Forbes @happyhippiefdn @gucci." She also shared a being the scene video of her shoot, in the video she could be heard saying, "Songwriting is the greatest joy that I have in my life. It’s my favourite element of what I do. Taking it in and being grateful every day for the fact that I write songs for a living because a lot of people write songs and it doesn’t get to be what keeps their lights on and for me to be able to be one of those people, I never forget how lucky I am," she said."

I turned 29 last week. It was now or never. Thank you for the honor. @Forbes @happyhippiefdn @gucci pic.twitter.com/tPbtDXbSpF