The magnum opus Baahubali- The Beginning and The Conclusion released quite a few years back, however, the buzz around the film & actors never seem to die down

The magnum opus Baahubali- The Beginning and The Conclusion released quite a few years back, however, the buzz around the film and the actors never seem to die down. For the uninitiated, the first installment of the film was being screened in London on October 19, and in a surprise for all the fans, the entire cast reunited. Producer Shobu Yarlagadda, director SS Rajamouli, Prabhas, Rana Daggubati, and Anushka Shetty flew from Hyderabad to London and were spotted chilling on the streets of London. A photo of the five of them from London is going viral on social media.

READ: Prabhas: The Baahubali's Journey From Struggling Actor To Superstar

In the picture, the entire cast can be seen striking a pose for the camera all in smiles, while donning casual outfits. Take a look below- 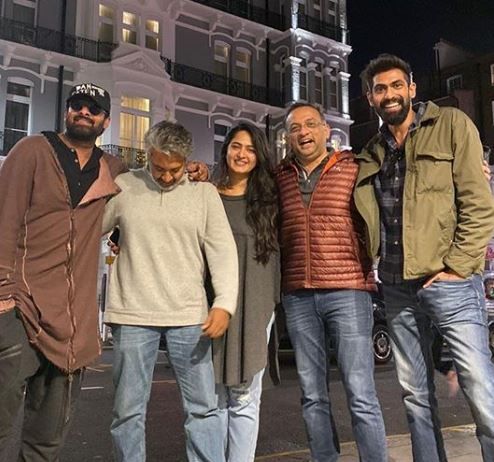 Released in 2017, Baahubali: The Conclusion is the second part of Baahubali franchise. Baahubali: The Beginning and Baahubali 2: The Conclusion stars Prabhas and Rana. The film's story is about the battle for the ownership of an ancient kingdom between two brothers. Baahubali: The Conclusion was one of India's highest-grossing films. On completing two years of the film's release, Prabhas in an interview with a news agency stated that the franchise was one of the most cherishable moments of his life. The 39-year-old south actor, who attained pan-India star status after the release of the two Baahubali films, said even after two years he still misses being part of the beautiful universe created by filmmaker SS Rajamouli.

READ: SS Rajamouli: Must-watch Films Of This Baahubali Director On His B'day

"I miss every set up from 'Baahubali'. From shooting for the film, the sets, the war sequences. It is a journey of five years which is a really long time to have an emotional connect with. The whole mood of the periodic effect that Rajamouli created is one of the most cherished times that I could ever be a part of," Prabhas said in a statement.

READ: Prabhas: What Lies In The Future For The Baahubali Superstar?

PEOPLE HAVE PLEDGED SO FAR
Prabhas: A list of the actor's films that failed at the Box Office
Prabhas reveals his hectic shooting schedules; details here
Prabhas: Here are the actor's thoughts before a film release
Prabhas: Four movies you must watch of south superstar
Prabhas is coming up with the romantic film Jaan - here's what we know
Vijay Deverakonda shares the first song for his upcoming romance film 'World Famous Lover'
Allu Arjun's 'Icon' and 'AA20' to release in 2020; here's all you need to know
Janhvi Kapoor vs Sara Ali khan: Who rocks stiletto game better?
DO NOT MISS
BJP: 'WE ARE USED TO LAL MIRCHI'
JEFF BEZOS PHONE HACK BY MBS
BJP'S QUESTION ON UDDHAV AYODYHA
KEJRIWAL LAUDS MP GOVT'S SYSTEM
SHIV SENA REFUTES CONGRESS
LIFE INSURANCE FOR NRI IN INDIA