The I&B Minister Anurag Thakur, at the Cannes Film Festival, announced an incentive scheme for audio-visual co-production and shooting of foreign films in India 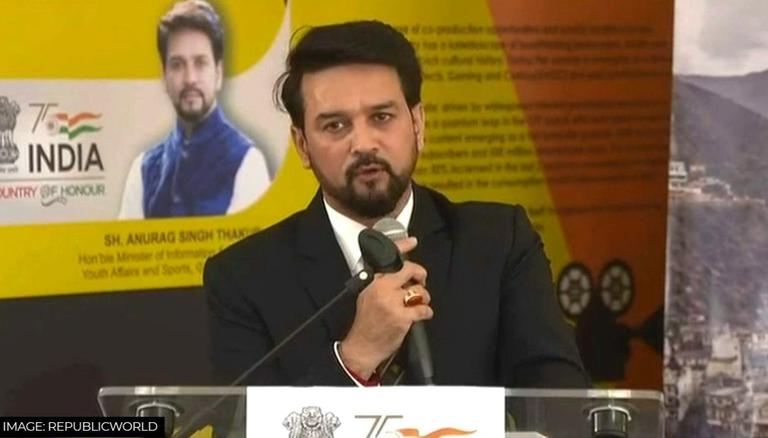 
Union Minister for Information and Broadcasting and Youth Affairs Anurag Thakur, on Tuesday, led the 11-member Indian delegation at the inaugural of the 75th Cannes Film Festival in France. The I&B Minister at the inaugural of the Indian Pavilion at the prestigious film festival also announced an incentive scheme for audio-visual co-production and shooting of foreign films in India with a cash incentive of up to 30% with a capital of $260,000.

I&B Minister Anurag Thakur in his opening statement said, "We in India don't just have the film industry but we have Cinema (stressing the word Ma as it represents mother in India). For the last 20 years, they have regularly been a part of the jury at the Cannes film festival. In the past, we have Aishwarya Rai Bachchan, Sharmila Tagore, Vidya Balan, and Shekhar Kapur amongst many others have been on the jury. This year, this honor goes to Deepika Padukone."

"Such is the power of Indian cinema and it is not only the story of 6000-year-old civilization, not only the story of 1.3 billion tales but also the story of human talent, triumph, and the trajectory of the new India narrated through your lens. I firmly believe that the India Pavilion is the pantior for the partnerships amongst the global film fraternity and panorama of India through cinematic journey."

"I'm delighted to announce today in Cannes an incentive scheme for audio-visual co-production & shooting of foreign films in India with a cash incentive of up to 30% with a cap of USD 260,000," the Union Minister added at Cannes 2022.

I'm delighted to announce today in Cannes an incentive scheme for audio-visual co-production & shooting of foreign films in India with a cash incentive of up to 30% with a cap of USD 260,000: I&B Minister Anurag Thakur at inauguration of India Pavilion at 75th #CannesFilmFestival pic.twitter.com/G8GA8Hmmcu

On the opening day, 10 Indian celebrities, musician AR Rahman, actors R. Madhavan, Deepika Padukone, Nawazuddin Siddiqui and Tamannaah Bhatia, filmmaker Shekhar Kapur, two-time Grammy award winner Ricky Kej, CBFC chief Prasoon Joshi, folk singer Mame Khan and the Union Minister Thakur graced the Cannes Red Carpet. Padukone, who has been a regular at Cannes for the past few years, made her debut as one of the eight-member jury board at the film festival.

Additionally, India has also been named as the first-ever official 'country of honour' at Marche du Film, the business counterpart of the Cannes Film Festival. India is also a ‘country of honour’ at the 'Cannes Next', under which five new startups would be given an opportunity to pitch to the audio-visual industry.