The crime thriller drama is helmed by 'Inside Edge' fame Karan Anshuman & is produced by Excel Entertainment; the release date of the 2nd season is undeclared

Mirzapur fans have been eagerly anticipating the second season of the show after its last season's cliffhanger finale. The Pankaj Tripathi and Ali Fazal starrer Amazon Prime Video web series completed one year of its premier today and the makers have dropped a teaser for the second season. The makers took to Twitter to announce the return of the crime thriller and posted a video with the words- "Season 2 ke aane wale toofan ka ehsaas ho raha hai na?"

The 20-second video is as thrilling as the foreboding message that it conveys through Pankaj Tripathi's voice. Actor Pankaj Tripathi plays the role of Kaleen Bhaiya, the ganglord of Mirzapur who indulges in drugs, guns and controls the local government of the area. Kulbhushan Kharbanda is seen as the patriarch of the household who is also the criminal mastermind throughout the show. Mirzapur also features Ali Fazal and Vikrant Massey as Guddu and Bablu Pandit respectively who play the daredevil youth in need of recognition through power. Divyendu Sharma plays the role of Kaleen Bhaiya's son, Munna Bhaiya. Rasika Dugal, Shriya Pilgaonkar and Shweta Tripathi are also seen in key roles.

Actor Pankaj Tripathi made his Instagram debut with the teaser of the upcoming season of Mirzapur as he shared the video through his account. The first season of Mirzapur was criticised for glorifying the gangland culture of Uttar Pradesh. Even so, it was well-received by the masses who could enjoy the thrill in this realistic depiction of a hamlet in the country. The fans of the show have reciprocated Pankaj Tripathi's welcome through their responses on Twitter.

Some of the netizens' responses: 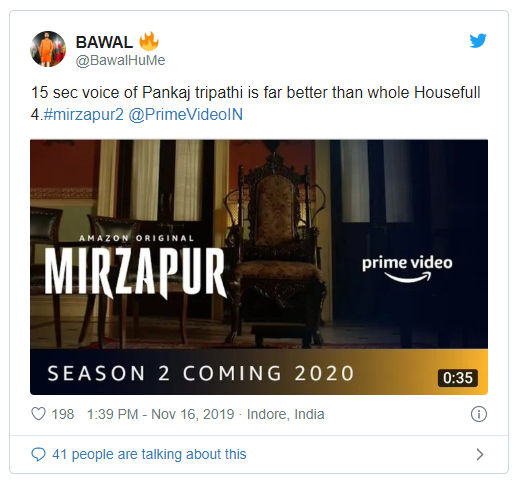 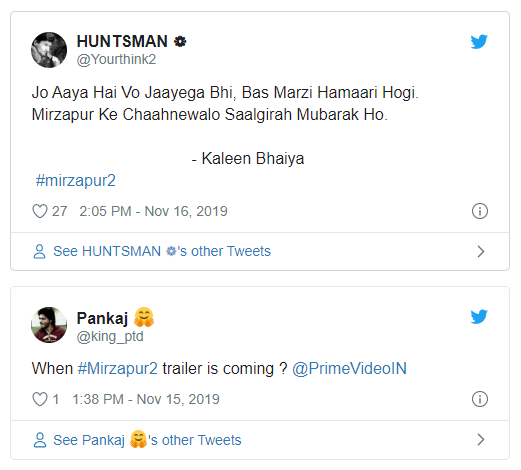 Read | Pankaj Tripathi Gets Injured, Continues Shooting With Ranveer Singh For '83 In London. Here's What The Actor Said 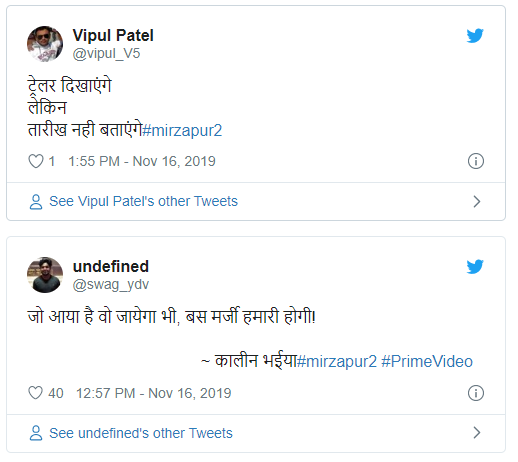 Read | Sacred Games 2: Pankaj Tripathi Reveals 'was Scared About A Role' For The First Time In His Career, Watch Full Interview Here