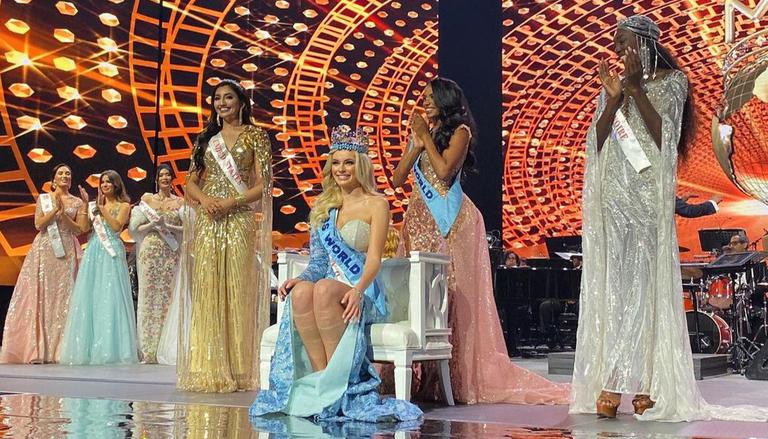 
Poland's Karolina Bielawska has been crowned as the Miss World. Bielawska was declared as the winner of the 2021 edition of the competition held at the Coca-Cola Music Hall Puerto Rico, San Juan, Puerto Rico on Wednesday.

USA's Shree Saini was announced as the first runner-up at the event. Côte d'Ivoire's Olivia Yacé was declared as the second runner-up.

"Our new Miss World is Karolina Bielawska from Poland," the official Instagram handle of the Miss World competition announced. Miss World 2019 winner Toni-Ann Singh handed her crown over to the new Miss World as the runners-up, Shree Saini and Olivia Yacé, cheered for the winner.

The trio beat the contestants from Indonesia, Mexico, Northern Ireland, who had also made it to the Top 6.

As per the official Miss World website, Bielawska is a model and also a student. She was pursuing her Master’s Degree in Management and intends to get a Ph.D too.

She aspired to become a motivational speaker. Swimming, scuba diving, tennis and badminton are some of her interests. She chose “Zupa Na Pietrynie” as her Beauty with a Purpose initiative, which provides help to homeless people, through food, clothes and COVID-19 vaccination, and raise awareness on social exclusion.

USA's Shree Saini, apart from being the first runner-up, won the Beauty with a Purpose Award.

Earlier in the day, Toni-Ann Singh had performed a beautiful rendition of the song Never Enough. The song was to stand in solidarity with Ukraine, as the nation has faced attacks from Russia amid the ongoing war.

India's Manasa Varanasi made it Top 12

After Harnaaz Sandhu won the Miss Universe last year, there were hopes from Manasa Varanasi to win the crown. The 24-year-old made a grand entry dressed in a white gown for the event with 'India' on her sash and the screen behind her.

She made it to the Top 12, along with Vietnam, Mexico, Northern Ireland, Philippines, Poland, Somalia, United States, Colombia, Czech Republic, France and Indonesia. However, she could not progress to the Top 6.