A picture of singer Ranu Mondal with 'terrible make-up' was doing rounds on the Internet and now the make-up artist has claimed that it is a fake. Read below-

Internet sensation Ranu Mondal who impressed everyone with her singing went viral on social media a few days back but for all the wrong reasons. A picture of the singer with 'terrible make-up' was doing rounds on the Internet that has left everyone shocked. Mondal, who was invited at a beauty salon event was seen wearing a lehenga, and also later walked the ramp with the make-up artist. However, recently, news has surfaced wherein the make-up artist has claimed that the picture of the viral singing sensation is a fake. She also went ahead to share a 'real' picture on Instagram. Take a look-

In a long post, the artist claimed that there is a 'difference' in the work she and her team have done to the fake picture that has been edited to a vast extent. "All the jokes and trolls are fine and they make us laugh too but to hurt someone sentiments, that's not a very good thing to do", she wrote.

READ: Amidst Ranu Mondal Makeup Memes, Celebrities Come Out In Support Of The Internet Sensation

However, after the make-up artist shared the picture many netizens were left divided. While a few felt that the picture was heavily edited, there were many who claimed that the original picture that had gone viral is one that has to be believed. Check reactions below- 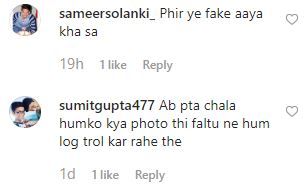 Ranu Mondal became a popular name after her video, singing “Ek Pyaar Ka Naghma hai”, at a railway platform, went viral. Impressed with her talent, music composer-singer Himesh Reshammiya recorded two songs with her for his upcoming film Happy Hardy and Heer. At the launch of the song Teri Meri Kahani from the movie, Mondal said she was blessed to receive this opportunity. “I am grateful for the love of people. They have given me immense love and I got a chance to sing. Himesh ji gave me this big chance, relying solely on my voice. I’m so grateful. If I didn’t have the love, I maybe wouldn’t have been able to sing songs. I have God’s love, which is why I could sing,” Mondal added.

READ: Who Is Ranu Mondal? The Rags To Riches Journey Of The Ashiqui Mein Teri 2.0 Singer