Atharvaa Murali has been tested positive for COVID-19. His former co-stars Anaika Soti, Mishti Chakraverty, and Vedhika wished him a speedy recovery.


After Pawan Kalyan, Nivetha Thomas, and Malayalam actor Tovino Thomas, Tamil actor Atharvaa Murali is the latest celebrity to have tested positive for the novel coronavirus. On Saturday, the 31-year-old actor took to his Instagram handle to inform the same to his fans and followers.

He added in the statement that he has mild symptoms and was home-quarantined. He was hopeful to make recovery soon and get back in "action". His statement read "After having mild symptoms, I have tested positive for Covid-19. I'm currently quarantined at home taking all the necessary precautions. Hope to make a full recovery and be back in action soon. (sic)."

Upon hearing news of Atharvaa Murali covid-19 positive result, many of his fans and even his co-stars sent heart-warming messages to wish him a speedy recovery. His Semma Botha Aagathey co-star Anaika Soti wrote "Get well soon Starboy" adding star emoticon in the comment. His Dhanam Moolam co-star Mishti Chakarverty was sad about the news and wrote "Ohhh.. get well soon boy" with a crying face emoticon. His Pardesi co-star Vedhika wrote "feel better soon" with a pink flower emoji in the comments. 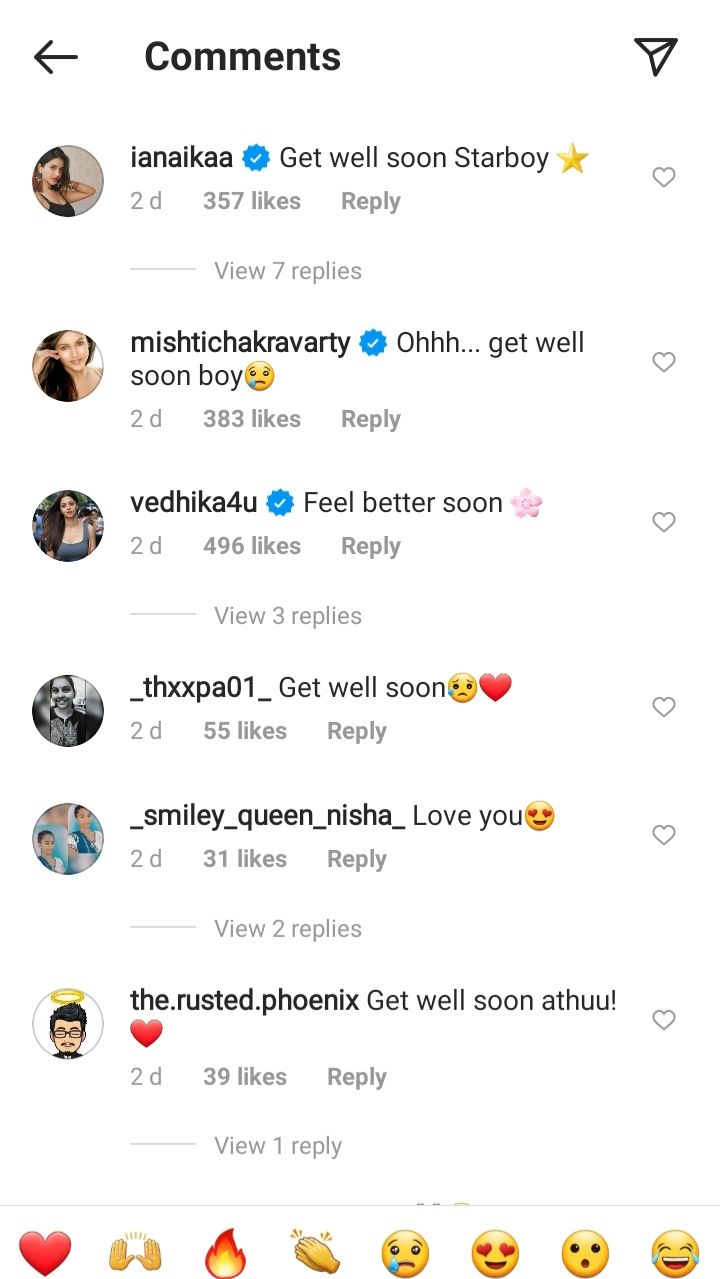 A look at Atharvaa Murali's movies

Atharvaa Murali, who is the son of late actor Murali, made his debut in Tamil cinema as the lead in the 2010 film Baana Kaathadi. He gained critical acclaim for his performance as Ramachandra, a youngster suffering from delusion, in the 2012 romantic thriller Muppozhudhum Un Karpanaigal. He then featured in Bala's period film Pardeshi in 2013 in which he essayed the role of Raasa, a rural villager held as a slave in a tea plantation.

The lead role turned out to be his breakthrough performance and he went on to win several accolades including Filmfare Award from Best Actor- Tamil, Special Jury Award at the 11th Chennai International Film Festival, and many other awards. His other popular movies include Eeti, Kanithan, Imaikaa Nodigal, Gaddalakonda Ganesh, 100, and many more. He is currently awaiting the release of Thalli Pogathey which is in its post-production stage. The film is an official remake of the Tollywood film Ninnu Kori and will star Anupama Parameswaran and Amitash Pradhan in lead roles with Atharvaa. Other than that, he has many films in his pipelines including Kuruthi Aattam, Othaikku Othai, and Rukkumani Vandi Varudhu.