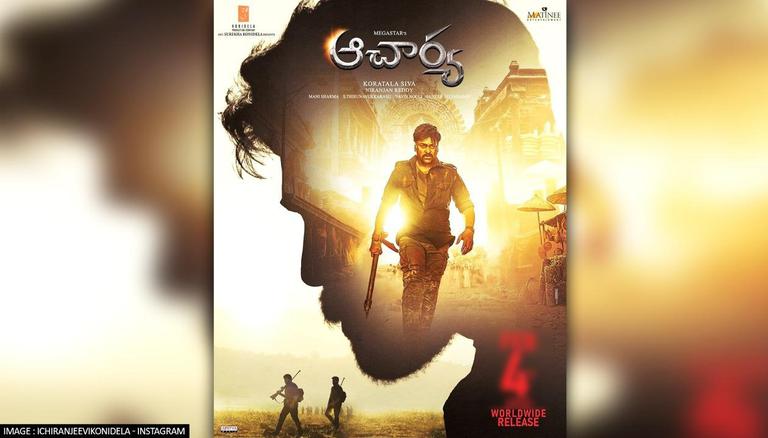 
Touted as one of the highly anticipated films of the year from the South cinema, veteran actor Chiranjeevi has finally announced the release date of his upcoming action-drama flick Acharya. The movie also features his son Ram Charan in a cameo appearance, which fuelled to the anticipation of the fans to watch the duo work their magic together. Affected due to the COVID-19 restrictions, the movie was supposed to be released in May but was postponed indefinitely.

Taking to his Instagram on October 9, the 66-year-old actor announced that his forthcoming Telugu drama flick titled Acharya will be released on February 4, 2022. Along with the announcement, he shared an exciting poster of the movie where he is seen wielding a weapon in hand against the silhouette of what looked like actor Ram Charan. He captioned the post writing, ''#Acharya Arrives on 4th Feb 22 @MatineeEnts @KonidelaPro @AlwaysRamcharan #SivaKoratala #AcharyaOnFeb4th''

Fans could not be happier as they were eagerly waiting for the official announcement after the initial delays in the release. The word 'finally' echoed throughout the comment section as netizens rejoiced to have a date to mark their calendars. Many fans wrote that they will patiently wait for the release while one wrote, 'Boss is back'.

Written and directed by Koratala Siva, the movie will also feature Kajal Aggarwal, Pooja Hegde, Sonu Sood, Jisshu Sengupta, Saurav Lokesh and more in pivotal roles. Devi Sri Prasad will be in charge of music composing for the film. The film is set to revolve around a middle-aged Naxalite-turned-social reformer launching a fight against the Endowments Department over misappropriation and embezzlement of temple funds and donations.

Touted as one of the biggest actors in the South film industry, Chiranjeevi has forged an impressive resume with a number of blockbuster movies under his belt. Some of his popular movies include Indra, Swayam Krushi, Jagadeka Veerudu Atiloka Sundari, Gang Leader, Kondaveeti Donga and more. Along with television series and reality shows, the actor also enjoyed a flourishing career in Politics as the former Member of the Andhra Pradesh Legislative Assembly.

WE RECOMMEND
'Love Story': Naga Chaitanya thanks Aamir, Chiranjeevi for their love & support for film
Gandhi Jayanti: Chiranjeevi, Mohanlal & other South Indian celebs pay tribute to Bapu
Ram Charan pens heartfelt note for father Chiranjeevi on completing 43 years in Tollywood
Sai Pallavi reveals why she refused the role of Chiranjeevi's sister in 'Bhola Shankar'
'Love Story' event: Chiranjeevi is all praises for Aamir Khan and Naga Chaitanya
Listen to the latest songs, only on JioSaavn.com