'Liger' stars Vijay Deverakonda-Ananya Panday & co were living it up in USA during the shooting of the pan-India film revolving around boxing. 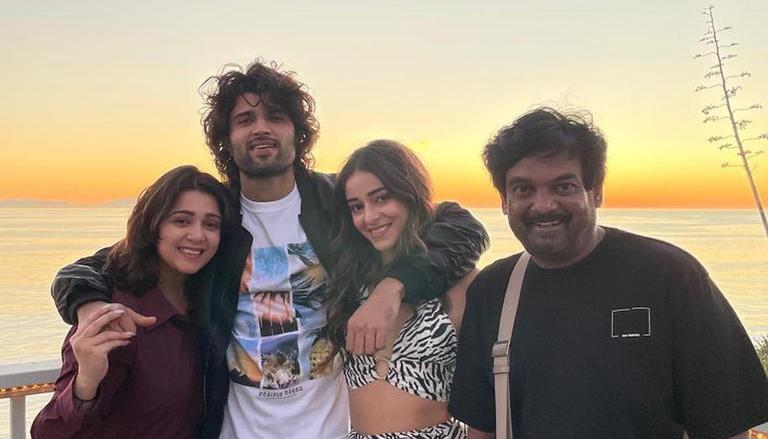 
Terms like 'Pan-India star' or 'Pan-India films' are doing the rounds nowadays with South stars featuring in multi-linguals, most of them being action ventures. After Prabhas, now, Arjun Reddy star Vijay Deverakonda is also attempting the same with his forthcoming venture Liger. The film is touted to be an actioner revolving around boxing, and one of the key highlights related to the film has been the inclusion of the sporting legend Mike Tyson in the cast.

The shooting of the film is currently underway in Los Angeles. Looking at the latest pics from the sets of Liger, the cast and crew seem to be having the time of their lives. Vijay Deverakonda's co-star Ananya Panday too featured in the photos.

Vijay Deverakonda was flanked by actresses Ananya Panday and Charmme Kaur in the photo posted on Instagram. They were accompanied by the director of the film, Puri Jagannadh.

The lead actor donned a black jacket and jeans over a printed white t-shirt while Ananya was dressed in a zebra-print dress. Charmme, who is one of the producers of the film, donned a maroon outfit, while the veteran filmmaker, who is also the writer of the film, was all smiling in a black t-shirt. The sun behind them made up for a stunning backdrop.

'Hello from LA,' read the Arjun Reddy star's caption alongside a hug emoji.

Prior to this, pictures of the team with Mike Tyson had sent the internet to storm. The cast donned some fun-filled poses too, like the glimpses of the half faces of Mike and Vijay and the 'bite fight' pose with Ananya.

Earlier, at the time of the announcing Mike Tyson as a part of the venture, Vijay Deverakonda wrote:

"We promised you Madness! We are just getting started.

For the first time on Indian Screens. Joining our mass spectacle - LIGER

The Baddest Man on the Planet
The God of Boxing
The Legend, the Beast, the Greatest of all Time!

The first look posters of Vijay Deverakonda as a boxer had earlier been unveiled by the makers.

The film was earlier gearing up for September 9, 2021. However, the delay in shooting owing to COVID-19 will make the film hit the theatres next year.