South star Prithviraj Sukumaran, who is headlining Bhramam, said the upcoming Malayalam remake is funnier than its adaptation of the Bollywood hit Andhadhun 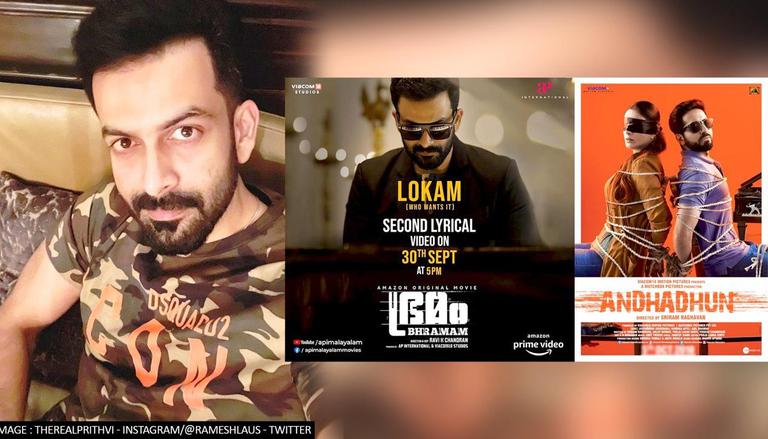 
South star Prithviraj Sukumaran, who is headlining Bhramam, said the upcoming Malayalam remake is funnier than its adaptation of the Bollywood hit Andhadhun.

Helmed by cinematographer-turned-director Ravi K Chandran, Bhramam is a highly anticipated film in which Prithviraj essays a blind pianist. The role was originally played by Bollywood actor Ayushmann Khurrana in Sriram Raghavan's directorial. The recently released trailer of the film has piqued the interest of the moviegoers.

In a recent interview with PTI, Prithviraj opened about his upcoming film Bhramam and said that the film even being a remake have its own quirks and surprises. For him, he can relate more to Malayalam version as it is funnier and more wicked than Andhadhun, added the actor.

"As an original material, Andhadhun lends itself beautifully to the Malayalam milieu. Having said that, it still needs to have its own little quirks and surprises, which Brahmam has. For me, who has seen both, maybe I relate more to the Malayalam language, Bhramam is funnier, in fact, it is more wicked. That makes it an engaging watch."

The 38-year-old actor further said that they have tried to present Bhramam as an engaging viewing experience to somebody who has already seen the original.

" When one is attempting a remake, they need to acknowledge and respect the original. It is important that one remains faithful to the core of the film. From there, it is crucial to sit down and adapt it intelligently. It’s important, especially for a cult film like Andhadhun, that one presents an engaging viewing experience to somebody who has seen the original,"

Prithviraj tried not to base his character on Ayushmann's interpretation

Prithviraj revealed that the moment he was onboard for Bhramam, he treated the film as an original. He consciously tried not to draw from the performance of Ayushmann Khurrana which earned him a National Award.

“It was important for me to not base my performance on Ayushmann’s interpretation of the character. I wanted to base it on the Malayalam text that was in my hands. At the end of my interpretation, if what I have done is similar to what Ayushmann has done, so be it. But I still wanted to go through that exercise. I hope it does justice to the original and we match up to that piece of cinema.”

READ | Prithviraj Sukumaran hops on to ‘Manike Mage Hithe’ trend, plays the cajon to its beat

Jointly produced by AP International and Viacom18 Studios, the film is set for digital release on Amazon Prime Video on October 7. The statement from the streamer read, "His musical journey gets interlaced with suspense, inspiration, confusion, and drama as he gets embroiled in a murder mystery. As the plot thickens and a set of bizarre events unfold, wit and survival create the fabric of the film coupled with a stellar background score by musician Jakes Bejoy."