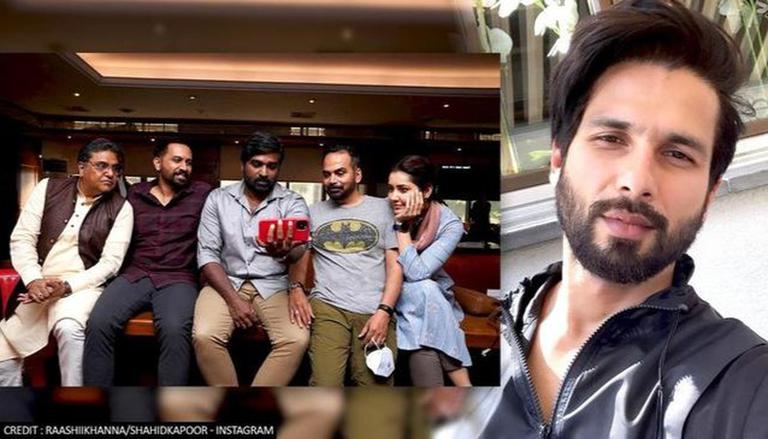 
Shahid Kapoor is all set to make his digital debut as he collaborates with the director duo Raj & DK, who have previously helmed the popular Amazon Prime Video show The Family Man. Shahid will be seen alongside the Madras Cafe actor Raashi Khanna as well as superstar Vijay Sethupathi. Raashi and Shahid have been shooting for the show, constantly sharing goofy BTS photos from the sets.

Raashi took to her Instagram account today, uploading a photo with co-actor Vijay and the makers, as they seem to be watching something really interesting. Khanna teased Shahid in her caption, stating that she misses his presence on sets. The show was announced earlier this year in February and is touted to be a drama thriller. Shahid has previously teased his look from the show on his social media handles.

Uploading a group picture with Vijay, Raj & DK, she wrote, "@shahidkapoor I miss you onset unlike you..! @rajanddk Guess what we are watching. What say @shahidkapoor? 😉 @officialzakirhussain @raj.nidimoru @actorvijaysethupathi @krishna.dk ". The post left fans wondering what's cooking on the movie's front as they poured the actors' comments section with heart and heart-eye emojis.

Last month, the duo engaged in a fun banter on set stills from which were posted by Khanna on her social media handle. The photo shows shahid looking in bewilderment as Raashi can be seen hugging the director. Teasing the Haider star again, she wrote, "It’s ok @shahidkapoor They love you too! @rajanddk."

Shahid also gave fans a glimpse of his look as he shared a video flaunting two neck tattoos. Giving a smirk and a wink to the camera, he wrote, "Waiting on set call me soon @rajanddk … can't wait to share the frame with @actorvijaysethupathi sorry @raashiikhanna I’ve got too used to having you around on set.”

The duo's collaboration is helmed by Raj Nidimoru and Krishna DK, with a script written by Sita R Menon, Suman Kumar and Hussain Dalal. Apart from this Shahid Kapoor will be next seen in the upcoming film Jersey. It will be a sports drama which will also star Mrunal Thakur and Pankaj Kapur. The movie is a Hindi remake of a 2019 Telugu flick with the same title.

On the other hand, Raashi will be seen with Dhanush in Thiruchitrambalam. She also has films like director Rajesh Mapuskar’s web series Rudra -The Edge of Darkness, Tughlaq Durbar, Aranmanai 3, and Bhramam in her kitty.

WE RECOMMEND
Watch: Shahid Kapoor joins brother Ishaan Khatter for an impromptu dance session
Shahid Kapoor shares glimpse of his camaraderie with Raashi Khanna in Raj & DK's next
Shahid Kapoor's 'Ishq Vishk' co-star Shenaz reveals she and Amrita Rao did not get along
Shahid Kapoor credits 'Kaminey' for allowing him to express as an actor
Shahid Kapoor shares doting wish on wife Mira's birthday, says 'You're center of my world'