Revathy Sampath Reveals Names Of People Who Harassed Her, Accuses Actor Siddique Too

Revathy Sampath took to her social media handles recently and released a list of names of people who have allegedly harassed her. Read on to know more. 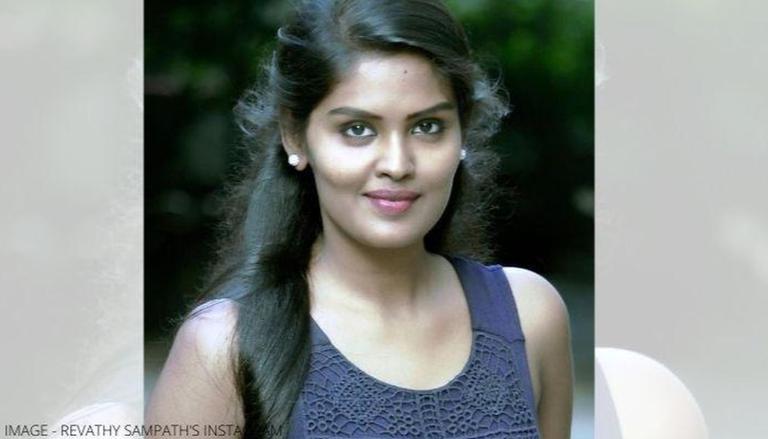 
Malayalam actor Revathy Sampath has been making headlines ever since she took to her social media handles and shared a list of people who allegedly harassed her. The list shared on Revathy Sampath's Facebook account also mentioned popular actor Siddique among other people. The actor also added that she is not scared to expose these people in public now.

Revathy Sampath releases a list of people who harassed her

Malayalam actor Revathy Sampath took social media by storm as she released a list of 14 names of people who allegedly harassed her. The list featured names of popular personalities like actor Siddique, director Rajesh Touchriver, a police inspector, and a doctor as well. Revathy also named a DYFI leader named Nandu Ashokan on the alleged sexual offenders' list. She wrote in the post, "This list comprises of people who have sexually, mentally, emotionally, and verbally harassed me. I am mentioning the names of these criminals below". 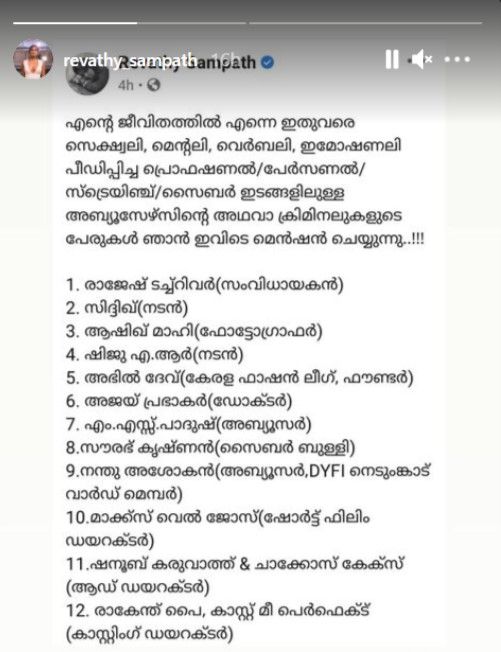 More about Revathy Sampath and her works

Revathy Sampath is a 27-year-old Malayalam actor, who made her feature film debut in the year 2019 with the film titled Patnagarh. Other than being an actor, Sampath is an activist and psychologist as well and has a degree in psychology from KSG College of Arts and Science, Coimbatore. Her most notable works include a short film titled Waft, which was released in 2018, a year before her big-screen debut. The film was directed by Vishnu Udayan and starred Syju John, Sampath, and Ashish Shashidhar in the lead roles.

READ | From Mammootty to Mohanlal, Malayalam celebs who have won the National Award
READ | DYK THIS Mohanlal film is the first ever Malayalam movie to enter the 100-crore club
READ | Malayalam veteran Siddique’s comment on Vijay earns the wrath of the ‘Mersal’ actor’s fans