Silambarasan has begun dubbing for Maanaadu, Pragya Jaiswal and Balakrishna have also wrapped up the shoot of their new film, Akhanda 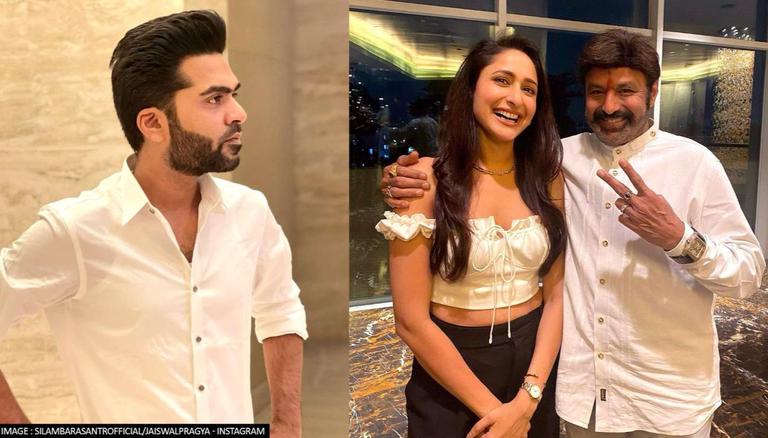 
Silambarasan aka Simbu is currently gearing up for his upcoming Tamil film titled Maanaadu in Tamil and Time Loop in Telugu, Tamil, Kannada, and Malayalam. The actor, recently, took to his Twitter handle and posted a video to inform his fans and followers that he has begun dubbing for the film. Scroll down to read more.

Taking to the micro-blogging site, Silambarasan dropped a video where he can be seen arriving at the venue and start his dubbing session with his other crew members. The video also gives a sneak peek into their fun moments while recording the actor's voice. Sharing the video, the actor wrote, "Vandhan.. suttan.. sethaan.. REPEATU! #Maanadu #MaanaduDubbing #Atman @vp_offl @iam_SJSuryah @thisisysr."

In the film, Silambarasan looks unrecognizable as he portrays the character of Abdul Khaaliq. Kalyani Priyadarshan will be seen as the leading lady. The film is scheduled to hit the theatres this Diwali on November 4. The film will clash with Superstar Rajinikanth's Annaatthe at the box office.

Furthermore, Balakrishna and Pragya Jaiswal have also wrapped up the shoot of their new film, Akhanda. The team members held a wrap-up party on Wednesday. Pragya took to her official Instagram handle and dropped several pictures with Balakrishna and other team members from the party.

She captioned the post, "Finally after almost a year, a pandemic and a couple of lockdowns later we wrapped up our film Akhanda test!! It’s been one of the most wonderful shooting experiences ever with the dream team...I’m so so grateful to our director #Boyapati Sir for being a driving force behind us all, #Balakrishna Sir for just being his positive, vibrant self & making even the most stressful days so fun & chill, my team for doing their best each day n being with me through all the 3ams & 4ams (the most hardworking team ever) & the entire cast & crew for making this journey a smooth sail... Heart filled with gratitude... See you soon in the theatres."