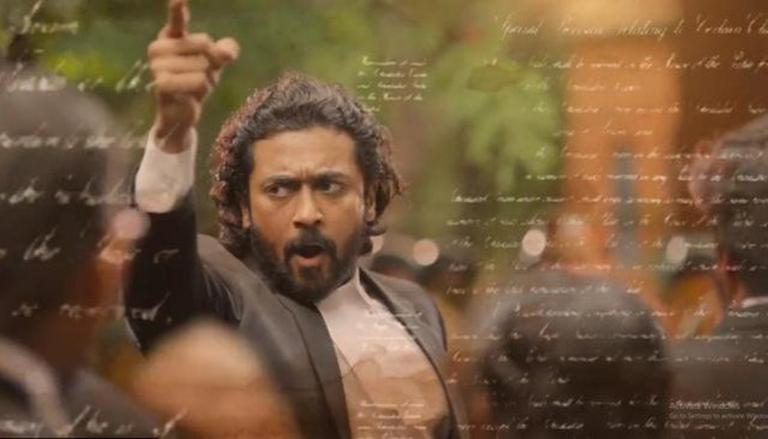 
Tamil actor Suriya on Monday treated his fans with a motion poster from his upcoming courtroom drama Jai Bhim. The film is set to release on November 2 on the online streaming platform, Amazon Prime Video.

Written and directed by Tj Gnanavel, the film will see Suriya essaying the role of a lawyer. He takes on numerous battles and fights for the rights and justice of the tribal communities in the movie. The cast also includes Prakash Raj, Rao Ramesh, Rajisha Vijayan, and Lijo Mol Jose essaying pivotal roles.

Taking to Twitter, Suriya retweeted the motion poster unveiled by the streamer with a caption, "Cracking some cases and bursting some truth bombs! Watch #JaiBhimOnPrime, this Diwali, on Nov 2. The poster introduces the actor in a powerful narrative setting and offers an animated tour through a courtroom with portraits of great personalities.

As fans are eagerly waiting for the release of the film, the new poster has doubled the hype building up around the movie. Commenting on the poster, one Twitterati wrote, "Woah Interesting", while  another wrote, "Can't wait to watch the film." Here's a look at some more fan reactions to the poster.

Our revolutionary social hero is back! #Suriya's #JaiBhimonPrime from Nov 2 on @PrimeVideoIN. Eagerly looking fwd!

Jai Bhim to showcase the struggle of tribal communities

Jai Bhim is about the struggles of certain sections of people in a divided society. The film will follow a tribal couple, Senggeni and Rajakannu, whose life is turned upside down after Rajakannu is arrested and disappears into thin air. This is when Suriya comes into the picture as he plays the role of Chandru, a lawyer who is hired by Senggeni in despair.

Suriya and his wife and co-star Jyotika have produced the movie under the 2D Entertainment banner. The film is a part of a four-film deal that the Tamil star has signed up with OTT giant Amazon earlier this year. As part of the collaboration, the next four Tamil movies from the actor's production house will premiere directly on Prime Video worldwide. Meanwhile, the music of the film is composed by Sean Roldan, which is the industry name of Tamil composer Raghavendra Raja Rao.

(With inputs from ANI, Image: @PrimeVideoIN/Twitter)