'Anupamaa' star Rupali Ganguly was super excited to welcome a swanky car along with her husband. She called herself as a 'proud Indian'. 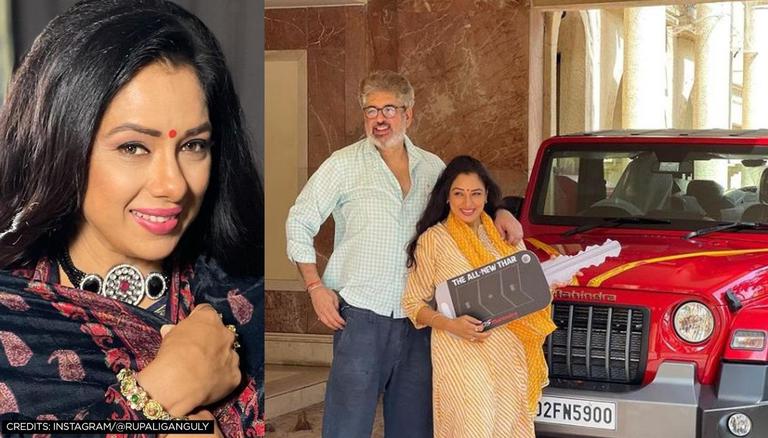 
Rupali Ganguly seems to be riding high on the popularity of her show Anupamaa, and has another reason to be ecstatic. The actor, along with her husband, ad filmmaker Ashwin K Verma are owners of a brand new car. Rupali also stressed on the importance of  ‘buying Indian’ along with her announcement.

Rupali looked super delighted as she, along with her husband, posed with her prized possession, as he held the ‘keys’ of the Mahindra Thar in her hands. Quipping over the height difference with Verma, she wrote that it was the ‘Tall and Short of it.’ The Sarabhai vs Sarabhai star also added that she was a ‘proud Indian’ while sending a message to ‘Be Indian, Buy Indian and Support Indian.’

The car had been among the headlines when Anand Mahindra had gifted it to Indian cricketers like Mohammed Siraj, Shardul Thakur and T Natarajan for their performance in the tour of Australia. Like Rupali, the sportsmen had also expressed their excitement about welcoming their new ride.  Another TV star Arti Singh too owns the same car.

Meanwhile, Rupali plays the titular role of a traditional homemaker in the serial Anupamaa, that has been among the well-known shows on Indian TV since its release in 2020.

The series also stars Sudhanshu Pandey, Madalsa Sharma, among others and has been No 1 on the TRP ratings for TV shows for most weeks since it has started airing on Star Plus. Numerous moments shown on the show have become a talking point on social media, and many of them also sparked memes.