Chhavi Mittal was diagnosed with breast cancer earlier this year and underwent surgery in April. 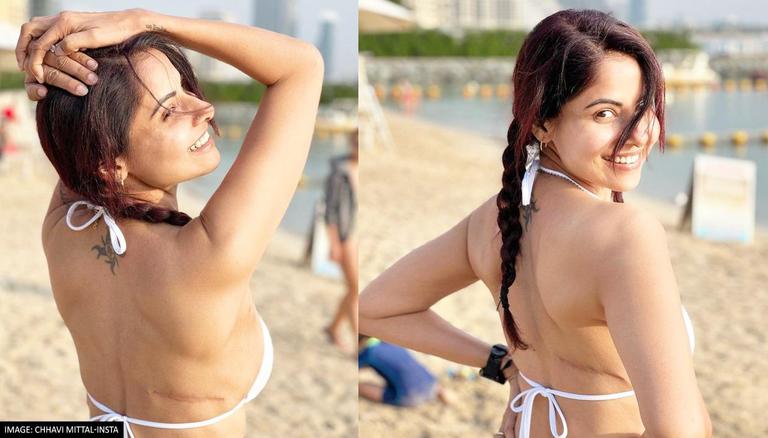 
Chhavi Mittal, who is a cancer survivor, recently shared a few pictures of herself on her Instagram handle, flaunting her breast cancer surgery scar.

The actor was diagnosed with breast cancer earlier this year and underwent surgery in April.

Sharing the pictures, Mittal wrote: "This is what I earned this year. A new life. A better one. A stronger one." Her caption was accompanied by the hashtags - Breast Cancer Survivor, 2022, Rewind, Year In Review, Happy 2023 and 2023.

Chhavi often shares pictures on her social media handle, showing off her surgery scar, with the intention to motivate others. In June, the actor shared a set of pictures of her scar for the first time.

Her caption read, "Scars. You can see the ones on the body.. but you’ll never see the ones etched on the bearer’s soul. Yesterday when I found the courage to flaunt this scar… there were some who flinched at the sight of it. I say, if the mere sight of it makes you flinch, imagine what I felt when it was given to me! But in my opinion, a man is not a complete man if he has the nerve to look down and admire a woman’s assets but is not brave enough to appreciate the effort she went through to save those assets."

She added,  "Some have also asked me if I’ll remove these scars with a laser or some such and I say never! They remind me of the fight I fought and the victory I achieved. Why would I ever want to hide these battle scars! That would be tampering with evidence! Proud to be a cancer survivor.

Chhavi was diagnosed with breast cancer in April

Sharing a picture of herself, the actor wrote, "Dear breasts, This is an appreciation post for you. The first time I noticed your magic was when you gave me immense pleasure.. but your importance peaked when you fed both my babies. Today it’s my turn to stand by you when one of you fights cancer."

"A big cheer for all breast cancer survivors... you have no idea how much inspiration I draw from you today. And also, for those of you who already know, thank you for being so supportive. Every call you make, every msg you send, every visit you pay me.. is appreciated no end and that’s all that makes a difference," wrote the actor.

On the work front, Chhavi is known for shows like 'Tumhari Disha' and 'Ghar Ki Lakshmi Betiyan.'